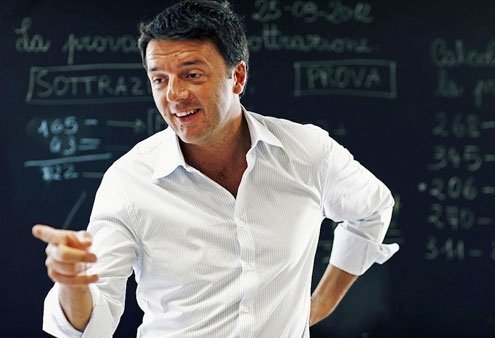 Renzi: a party putsch to get to the top.
P

rime Minister Matteo Renzi has a pebble in his shoe, an irritant that distracts from his damn the torpedoes, full-speed-ahead governing style, which whether loved or loathed makes for good conversation. There’s no disputing baby-faced Renzi is among the more dynamic figures Italy has seen in decades. He has promised to usher in legislative and workplace reforms, some of which may actually come to pass.

So where’s the rub?

The answer is peculiar: democracy, or at least democracy as structurally understood and accepted in the West.

Renzi is the third consecutive figure to lead Italy without a popular mandate. He’s a kind of non-lame lame duck, the result of a subverted process most have tired of objecting to, at least in strenuous terms.

In late 2011, with Italy on the financial ropes, President Giorgio Napolitano connived — either adroitly or slyly — to “depose” then Prime Minister Silvio Berlusconi, mired in dire straits, and replace him with an apparently apolitical economic technocrat named Mario Monti.

Besieged by mass media hysteria, Berlusconi surrendered to market chaos, with Monti’s arrival on the scene briefly hailed as the coming of a savior — until he began a series of draconian cutbacks that gradually enraged an Italian electorate unprepared for the actual consequences of real austerity.

When national elections were finally held in February 2013, more than a year into Monti’s occupancy, Grillo became spoiler and near champion, a role he treasures and has since memorized. It was the leftist Democratic Party (PD) that actually won the most votes, albeit by a whisker, but its leader, Pier Luigi Bersani, emerged stillborn, humiliated by Grillo’s showing.

Bersani tried and failed to form a government, and also failed to rally his party behind a consensus choice to succeed Napolitano, whose term had run out. So he quit. His deputy, Enrico Letta, who hadn’t figured in the previous vote, was drafted as the compromise choice for prime minister – minus Grillo, who continued raging against the machine.

Suddenly, Letta was Lame Duck II — following on the heels of the faded Monti. Letta behaved admirably enough, but was uninvitingly confronted not only with Grillo’s wrath but that of his own party’s Young Turk — meet Renzi.

Renzi had already staked out the PD’s leader-in-waiting claim, openly chomping at the bit. But the old guard of Bersani and Letta denied him. Now, primary elections vaulted him into party leadership, widely seen as a conduit to the top spot, paradoxically occupied by Letta.

The next step, at least in accordance with democratic protocol, should have been a second election to wash out the laundry. But Napolitano (elevated through deadlock to a second term) refused to take a chance on another sullied result. He instead encouraged Letta to continue.

That didn’t suit Renzi, or Grillo, or even Berlusconi, who associated Letta with the ancien régime left, the kind he’d spent a generation Red-berating. Quietly, he encouraged support for Renzi.

So it was the emboldened Renzi pulled off a palace coup, toppling his own man and asserting control over his party. It wasn’t so much a deft masterstroke as a Crimea-style annexation. By February, Renzi was where he’d always wanted to be: the prime minister, thus becoming Lame Duck III.

But he’s a different kind of duck. He insists popular support, and votes, matter less than the need for reforms, and that he’ll stick around, if allowed, through 2018 — the full six-year term that would have been allotted to the winner of the 2012 elections, had there been one. But there wasn’t. Instead, there’s Renzi: the non-winner but undisputed champion (“It isn’t enough, but it’s something,” he recently told Time magazine).

Curiously, the last elected Italian prime minister was Berlusconi, in 2008. Dangerously, Italians are starting to lose track of the relationship between votes and elected office. Renzi papers this over by saying that the country is ungovernable until electoral reform is signed, sealed and delivered. But it hasn’t been so far, and the delays, born of parliamentary infighting, further distract from concept of votes and elections. Though elections for the European parliament are coming up, they’re only incidentally connected to the goings on in Rome.

Renzi is no tyrant. He may yet be judged a visionary. But no public, no electorate, no crowd consensus placed him where he is now, which still has an unsettling effect. Elections, even deadlocked ones, are a lesson in civics. The more you say you’re setting aside such civics based on the common good, as Renzi insists he is, the more you tend to forget they even exist.