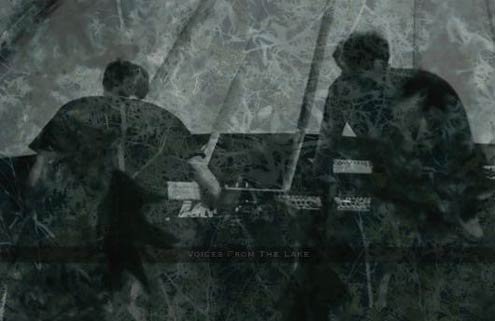 Donato Dozzy and Neel: Voices From the Lake.
T

hough wrapping up a year in music by highlighting a few essential Italian releases has become a yearend trademark, 2012 didn’t make the choosing easy.

Topping my list are Italian electronic music heavyweights Donato Dozzy and Neel, who joined forces in the remarkable Voices From the Lake. Their self-titled collaboration (Prologue) might seem like techno on a first pass, but the more you listen, the more the sound extends from that genre’s template into something richer and more universal.

This is an album for daybreak’s quiet hours, though it certainly didn’t start out that way. Catanzaro-born Giuseppe Tillieci, aka Neel, initially intended to make a semi-anonymous techno recording, but a late set at Japan’s renowned Labyrinth festival in 2011 set things going in another direction.

This is 70 minutes of incredibly organic music, a journey through jungles or around the distant edges of a mist-shrouded lake. Rather using beat to distract and make a “this is techno statement,” producer Dozzy and Neel have created a world unto itself, an engrossing experience with shifting percussion that appears and disappears from one track to the next. Ambient synthesizers form recurring themes.

Next up on my list is the familiar Ufomammut , still plugging away at the monolithic doom-metal they mastered with 2010’s Eve. They returned this year with not one but two releases, both predictably impressive.

The first was April’s ORO: Optimus Primum (Neurot), which continued the process of taking baby steps away from short-form metal toward the prog-rock expanses that have characterized their more recent work. Released by SupernaturalCat in Italy, the legendary metal label Neurot took over in the United States. Neurot is home of one of Ufomammut’s most prominent influences, Neurosis, and the Milan trio honored the connection.

ORO: Optimus Primum — much like Voices From the Lake — uses a series of motifs that evolve, change, and recur. The guitar lines are almost stupidly simple, but that’s part of the power: Ufomammut does more with less.

ORO: Opus Alter, released in September, was more restrained. The band considers the two ORO albums as a whole (I recommend listening to both together at least once) and you can sense their kinship from the opening moments of “Orobouros.”

While Optimus Primum worked to build theme, Opus Alter is more willing to defy it by breaking out into gritty, heavily distorted 1970s rock riffage. The notes on the distant, grumbling “Luxon” and the titanic “Sublime” may be just as rock simple (if not simpler) than those on Optimus Primum, but the impression you get is something else again.

Ufomammut may not be for everyone, but the ORO series demonstrates how they’ve honed the sound to which they’re so devoted. As a result, they’ve become among the world’s preeminent thinking man’s metal bands.