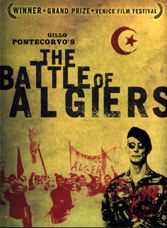 Gillo Pontecorvo’s extraordinary chronicle of strife hinges on one premise: That all sides — infinitely cruel — are at one time or another sure of their own righteousness. And that righteousness is a brand of slaughter. Though it views like a special report, the film is a fictional narrative with mostly unknown actors. Pontecorvo uses the Algerian uprising (which led to full-fledged war and Algerian independence) to probe the logic and ethics of the threatened colonialists, embodied by French colonel Mathieu (Jean Martin). “To know them means to eliminate them,” he says of the Algerian Front de Libération nationale (FLN) guerrillas. “Consequently, the military aspect is secondary to the police method.”

The FLN is represented by Ali La Pointe (Brahim Haggiag) and his mentor, the very real Larba Ben M’hidi, captured and executed by the French. “Acts of violence don’t win wars. Neither wars nor revolutions,” says Ben M’hidi. “Terrorism is useful as a start. But then, the people themselves must act.” Yet the people here are in the middle — heroic, humbled, decimated. This is a viciously beautiful elegy made gripping by Pontecorvo’s magisterial documentary style.