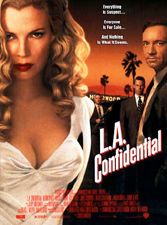 A bloody shootout in a city coffee shop leads to the arrests of three black youths. But gossip magazine publisher Sid Hughes (Danny DeVito) knows it’s all too tidy and tells detective Jack Vincennes (Kevin Spacey). Vincennes, an accomplished narcissist, doesn’t usually make waves at the office. This time, though, he enlists fellow detectives Ed Exley (Guy Pearce) and Bud White (Russell Crowe) to root out the bad-cop stench. Veronica Lake look-alike and call girl Lynn Bracken (Kim Basinger) is in deep, but seduces both Exley and White to keep them at bay.

It’s hard to imagine a better trio than Spacey, Pearce, and Crowe. They’re one man’s vanity, morality, and passion fleshed out and parsed three ways. Miss Lonelihearts Basinger races from sexual to sensual in a heartbeat. This and Roman Polanski’s “Chinatown” are peerless pieces of potboiler Americana.