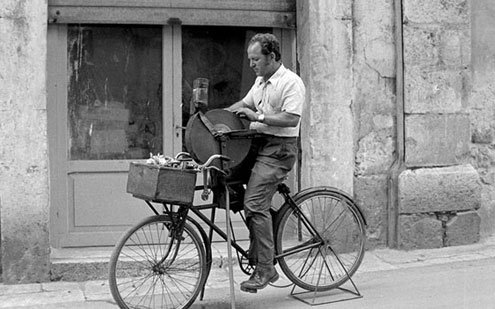 just missed my arrotino, the aging hunched man who wheels his ancient bicycle through the neighborhoods of Rome, sharpening anything with a blade for varying sums. One day it’s €2 per knife, another it’s €5, depending, I suppose, on how many housewives and restaurants have stopped him with their plastic buckets of tools and on what his wife needs for dinner.

He came to my last apartment, near the Campo de’ Fiori, often lingering to chat with the owner of the small dollhouse store next door. They were clearly old friends. He is ancient but not. It appears he’ll go on forever, his emphatic tenor cutting through the noisy maze that is Rome: “Arrotino, arrotino.”

He reminds me why I am here. As if I needed reminding. My cast of characters does it for me.

My arrotino, my snaggle-toothed vegetable vendor in the Campo, my punchy shoe repairman, the ancient brothers who sell me the best pork in Rome, the mad singer who serenades me under my window at the most ungodly hours… they’re all woven into the fabric of Rome, not so much a vast tapestry hanging in a frescoed hall of Palazzo Farnese but instead more like an old, worn Kilim made by an artisan whose gift of colors and textures emerged from his body and was made to flow into the warp and woof of a quilt stitched to last centuries.

For years, the mushroom lady (our vegetable vendor who also sold porcini of the highest quality) called out to me in the morning, “Signora, signora, oggi ci sono ravanelli per lei!” She would bring radishes especially for me, sometimes fresh and crisp, sometimes limp as wet clothes, their leaves crying out “Buy me, buy me, this little old lady needs to dump her day-old produce. Life is harder than before.”

Of course I obliged. “I know how you love them,” she’d tell me each time. She remembered a story I’d once told her: That one of the greatest chefs in the world, after closing his restaurant, dined on a simple plate of cold radishes, sweet butter and glass of good red wine.

She would bemoan her hurting hip, her ailments, the tribulations of working the Campo year after year at her modest stand. I knew her husband, who worked with her for years. I saw him weaken and fail. The day he wasn’t there after so many years was the day I learned he’d never be there again. She seemed so alone, except for the ever-smiling, gracious young Pakistani who helped her. We’d almost reached the “tu” phase when she fell. My husband and I went to the Fate Bene Fratelli with homemade ginger cookies (which she loved), and after a brief visit, left her to the staff. They were charmed by her resilience and humor.

She did not return to her stand at the Campo.

I worry that one day I won’t hear my arrotino, that I’ll find his bicycle abandoned in some alley, propped like a lost mutt against a wall enhanced with “Carla, ti amo” or “Lazio merda,” his sharpening wheel (attached to the pedals) still spinning.

And what about my serendipitous singer? Will he suddenly wake up from his operatic dream world and realize that he’s in the heart of a city, with tourists and residents crowding around him as he slowly moves through atonal aria after aria of his own creation? Pavarotti could not charm me more. He weaves his way through wary onlookers, yet another priceless thread in the rug that is my Rome.

Then there’s the cantankerous, ageless old men at my deli, shuffling into the back of the store to produce a perfect Wednesday mozzarella, or to carefully cut a slab of caciotta (always just a fraction more than what I asked for). Will I one day see their numbers reduced, three become two become one? Who will slice my prosciutto di montagna into translucent sheets? Who will around to banter the lore of ancient recipes, the relative merits of rough polenta vs. fine, the best way to roll a perfect porchetta? What will happen to the young woman at the tiny cash box counter, effortlessly embroidering even as she makes change for customers?

I suppose, as with any Kilim, broken threads come with time, colors fade like the once-brilliant blue of the little vegetable lady’s eyes, now filmy with time.

I did see her after her surgery, hair in a French twist, false teeth in, snapping along with her new hip near the Palazzo Farnese.

“Ernesta,” I cried, amazed to see my wizened old friend in an evidently new life, “ma come stai?” What was she doing here? I had imagined her living hand-to-mouth on her pension on the outskirts of Rome.

“I live here,” she said, looking almost sheepish. “Sai, I’ve had an apartment at Piazza Farnese for more than 60 years.”

One thread in my rug implanted for keeps.