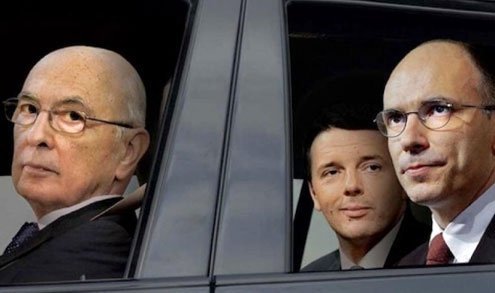 oday’s Italian left is little more than an existential conceit. Though it has long aspired to post-Communist relevance, recurrent political arrhythmia has denied it any one identity and left it vulnerable to endless insider paranoia and bare-knuckled outside criticism. It is a progressive party burdened by ulcers that even mavericks struggle to cope with let alone to sooth.

Former Florence Mayor Matteo Renzi, hailed by supporters as Italy’s Tony Blair, enters this no man’s land at his own peril. Elected to head Italy’s Democratic Party, the rusty goliath that descends from Communist roots, the ambitious Renzi has already run afoul of old hands who look suspiciously on interlopers, particularly those as yet not under Rome’s political thumb. He is a 39-year-old business-oriented noisemaker atop a querulous party that has little affection for trailblazers unless they reassuringly belong to a known faction.

Three of the left’s most recent national figures, former Rome mayors Francesco Rutelli and Walter Veltroni, and now — by default — Prime Minister Enrico Letta, come from tangled party roots. Rutelli began in the Radical Party youth movement, Veltroni as a Communist, and Letta as a Christian centrist. Ties to hard-line tradition left them with a mish-mash of “new left” views.

For decades, the Communist Party (PCI) was Italy’s only serious leftist movement. Redirecting the disillusionment of the Spanish Civil War — which saw the enthroning of a Fascist general — partisans and ideologues used the 1943 fall of Mussolini to push for power within a democratic framework. The PCI established itself as workers party in a country of bishops and landowners. Tied to the listless Socialists, who were later undermined by scandals, the left won 31 percent of the national vote in 1948 (the PCI earned 19 percent running alone in 1946). Between 1958 and 1987, the PCI picked up at least 25 percent of the vote in every Italian general election, developing a power structure as sophisticated as any in Western Europe. Flanked by an aggressive labor union, the party overhauled feudal life, created a social welfare system, and secured some jobs for life. Top-level Communist leadership established a “don’t tread on me” tone that former partisans and the in-house intellectuals vigorously defended. Good soldiers of the Communist left held to rightist-style discipline and dogma, values that persisted long after the party collapsed along with communism.

The country’s first and last Communist-lineage prime minister, Massimo D’Alema (he rose through the PCI youth movement), openly struggled with his Marxist past and only grudgingly allowed NATO to use Italian bases during the Kosovo bombing raids. Ideologues within D’Alema’s so-called Democrats of the Left, one of many post-PCI configurations, saw the idea of U.S. sorties flow from as an offense to the old party’s longtime anti-American bent.

Billboard names have changed many times since then but the pattern has not. The latest “new” left, the Democratic Party created by Veltroni in 2008, has Letta as prime minister and Renzi as party chairman, a moderate odd couple from different schools. Letta is a party man who swears by order while Renzi is an outsider seeking to make a reforming mark. The ascent of Beppe Grillo’s Five Star Movement, online populists contemptuous of left, right and government, has put what’s left of the left on the defensive.

Renzi, who succeeded traditionalist rival Luigi Bersani, is now tasked with one-upping the Five Star’s sturm and drang. That means attacking national leadership, ironically headed by his own party, and by Letta. If things weren’t Byzantine enough, Letta is also Bersani’s former deputy and the nephew of a key Berlusconi advisor. Renzi seeks a consensus on election reform and job production in an all-out push to wrest control of the country’s disenchanted voters from Grillo and give the left a craved majority.

But which left? Renzi’s loud gamble has predictably reopened a festering wound. The Bersani guard, and Letta, portrays Renzi as either a glibly casual neophyte or a friend to big money (read job losses), or both. Renzi responds by calling such prejudices outdated. Bersani’s party is a dead dinosaur, he says. But it’s not. Italian political leaders and parties can fall from favor or even collapse, but not without factions taking opportunistic refuge elsewhere.

Even Berlusconi, though ostensibly ostracized, continues assembling loyal acolytes, readying them as snipers. Meanwhile, the under-siege Letta, though only in his 40s, sees Renzi through the lens of his now ailing mentor Bersani, who always put PCI-styled prudence ahead of ambition.

In cynical Italy, Tony Blair flair, which once captured the imagination of British voters eager to anoint their own Bill Clinton, plays less of a role. Grandparents continue to hold quiet sway despite colossal youth unemployment. The country’s president is a near-nonagenarian former Communist. Revolt, when it comes, is tilted toward the hardball negative, which accounts in part for rude Grillo’s stunning rise.

Renzi has little wiggle room on such a stage. He is convinced he must take full advantage of Grillo’s stalled uprising while appearing to rearrange the silverware, which the Letta government represents. It’s a decimating paradox that reflects the political indigence of a dislocated movement whose existential woes are its only anchor.