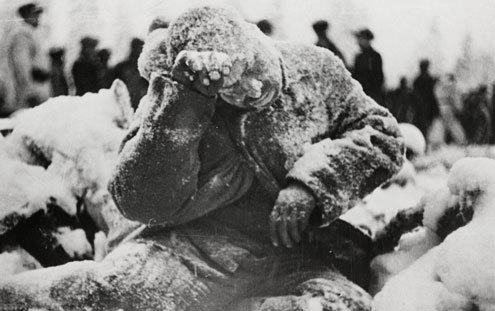 In the Winter War between Russia and Finland, 150,000 died, a third because of the conditions.
S

he tells me she’s depressed, and I demur. She lists her exotic medications with artisan-like precision — Lustral and Fetzima, Incidon and Ixel — their names crafted by pharmaceutical companies seemingly in the thrall of Aztec-Arabian deities.

Which is when I try to change the subject.

Is she cold, I want to know?

Cold? As in arctic air? As in polar freezes? She’s mostly indoors, she says, why should she be cold? Outside is cold. Her soul is cold. Otherwise there’s heat.

For most of 20 human centuries there may have been depression but there was no heat, aside, that is, from the hearths of the rich and the bonfires of the poor.

Coal didn’t burn until about 300 years ago.

What that means — think about it, I urge her — is that for more than 1,000 years people were cold both in and out, like it or not; they were born, lived and died cold, snuggling not only for sex and video but to forage for the human lumens needed to keep the body alert.

She’s depressed, yes, I understand, but I remind her the world was once unforgiving to all. The European palaces of yesteryear, the places conjured for historical fiction and film, all were all bitterly cold, and dark, sunset limiting if not shutting down most human activity. People slept in rooms the temperature of snow, and sometimes didn’t survive the night. Millions died in childbirth, millions more before age 30.

When not near a stream they drank the equivalent of sewage. Infection was constant. Filth went largely unrecognized, except as a line of demarcation between poor and rich, since the latter were covered in less of it. But not free of it.

She’s listening now, which is my point: anything to keep her from one kind of tablet or another.

Armies that swept west to east and north to south died in droves along the way, soldiers as beaten down by cold war itself. Hannibal lost thousands in the Alps. William the Conqueror escaped the worst of the English chill his troops did not. Later came Napoleon in Russia and Stalingrad, where frozen corpses helped fortify bridges. The wickedest of Borgia popes complained of arthritic bones that even hot whoring couldn’t cure (they instead contracted syphilis).

Take fantasy programs, I tell her. Look at Tolkien on screen; at George R.R. Martin’s “Thrones”; behold the majesty of the prettified prehistory, campsites and ice walls. Rarely does anyone shiver, and yet shivering comes up often in Shakespeare and Norse legend. Legions of people shake hard and vanish. There’s no heat to turn up. There’s no animal to lie with. Human centuries were little more than the perishable sum of their chilled meat. Survival of the fittest meant firewood and shelter.

What’s your point? she blurts out, turning defensive.

No “point,” I say, just the landscape of a pre-depressed past, when anxiety was survival only, and survival contingent on finding the heat that’s now taken for granted, depression a newer emergency.

But it’s not an emergency, I tell her. The inner urgency has simply taken the place of the outer one. Safe from killing cold, the heated world focuses instead on inner woes, itself no stranger — read Hamlet, read Beowulf — but still no match for the noir that was survival.

All that’s gone now, minus reality shows that manufacture crises they know to resolve. There’s heat. There’s light. There’s shelter. There is, at least, among those affluent enough to afford them. If self sickens you, there’s shelter from the storm in Lustral and Fetzima, Incidon and Ixel.

Still, I insist, no depression compares to cold’s one-time hegemony.