In Search of a Distant Voice 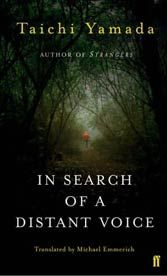 By Taichi Yamada, translated from the Japanese by Michael Emmerich

Kasama Tsuneo is a brooding Tokyo immigration police officer who begins hearing a disembodied female voice after a bust. He thinks it’s a joke, or that the voice is really that of a man from his past. Kasama reluctantly begins conversing with the voice, which he feels as a “wind” and which induces him to ejaculate involuntarily. His colleagues dispatch him to therapy but the conversation continues.

Yamada’s “borderline” ghost stories are appealing because they’re both ambiguous and crystalline. Kasama’s life is ruled by the “distant voice,” but it’s never clear whether he’s swayed by bad conscience or madness. “I have developed a tendency to suppress my feelings,” say Kasada.

But suppression alone does not a ghost voice make. Yamada quivers his stories to life and Emmerich renders Japanese into fast-paced, idiomatic English.