In My Brother’s Shadow 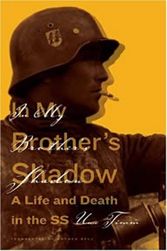 By Uwe Timm, translated from the German by Anthea Bell

Timm’s trim and moving autobiographical reminiscence centers on his older brother, who died at 18 while with the SS in Ukraine (serving in the “Death’s Head Division”), and his father, a Luftwaffe official who survived the war. But in keeping with most such German memory pieces, the narrative gnaws guiltily at the Nazi experience (“That at least one should do — bear witness.”)

Timm’s narrative is propelled by his brother’s mostly colorless Ukraine diary. Though Karl-Heinz Timm was a sapper, baby brother Ewe (“I, the afterthought”) won’t rule out his participation in the atrocities that characterized the bestial Ukraine fight (with Babi Yar at arm’s length). One terse entry haunts him: “Ivan smoking cigarettes, fodder for my MG.” MG is machine gun; Ivan is a Russian soldier. Six months after this entry, Karl-Heinz lost both legs and died in a field hospital. Their father Hans — “a soldier, a taxidermist, a furrier” — is sympathetic but tainted. The reason is his consensual (if bland) involvement in Hitler’s scheme. He and others “lacked the tools” of courage. “There can be no attempt at explanation,” Timm writes. And elsewhere: “Hushing it up was a kind of cowardice that became a habit.”

But loathing doesn’t erode family compassion. Timm loved his brother and father (and sister and mother, the most sympathetic characters). He forgives by not forgiving, plumbing horror in “self-defense.” After the war, Uwe Timm, who is now a leading German novelist, asked his father to remember details. Mostly, he refused — he had “an attitude that acknowledged only order and obedience.” — and tumbled into alcoholism. The one “everyday story” he does recall is (inevitably) outside any and all sensibility. In a POW camp, “a Russian prisoner had tried to escape and the guard fired at him, blasting off the top of the man’s skull, whereupon the other prisoners fell upon the dead man and ate his steaming brain.” In a place without atonement, some shadows may be lighter than others, but shadows they remain. Anthea Bell’s translation is exquisite.