“I feel quite lethal…” 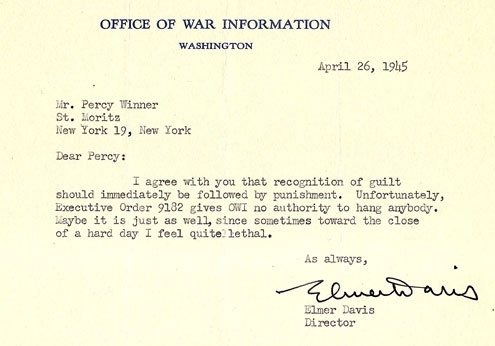 I feel quite lethal...
D

ry wit is a rare commodity in writing. All the more so in an age powered by exclamation points and so-called emoticons that impose emotion on all communication. Elmer Davis proved wit’s point in April 1945, responding to a note by an angry writer (and former employee) demanding the Nazi defendants at the Nuremberg War Crimes trials, if found guilty, immediately face punishment.

The Indiana-born Davis, a CBS Radio correspondent who had worked with Edward R. Murrow, was appointed head of the newly created U.S. Office of War Information in 1941. OWI was largely responsible for laying the groundwork for all U.S. propaganda in World War II, as well as ensuring Hollywood films supported the U.S. war effort.

Davis became a key figure in government, successfully persuading President Franklin Roosevelt to allow the publishing of U.S. battlefield dead, which the military opposed. “The public has a right to be truthfully informed,” he said. The first such photos were published in 1942. Davis was also vital in pressuring the military to form units composed of Japanese-Americans, opposing the larger tendency to intern Americans of Japanese decent.

He also set early standards for propaganda in films. “The easiest way to inject a propaganda idea into most people’s minds,” he wrote, “is to let it go through the medium of an entertainment picture when they do not realize that they are being propagandized.” This patriotic but markedly anti-hysterical vision of propaganda (OWI help produce and vet war-oriented films between 1942 and 1945) anchored the U.S. approach until cable television loudly overhauled the tone of all news presentation decades later, introducing bias as a norm.

OWI, which birthed the Voice of America, struggled constantly with the military, which sought greater control on what could and could not be said about the war effort, and also had to fend off criticism that its employees were pro-Soviet or left-wing leaning. It was disbanded in September 1945. The Nazi Nuremberg defendants convicted and sentenced to death were executed on Oct. 16, 1946 (Herman Göring, the highest ranking Nazi official, committed suicide the night before).

Both Davis and the more well-known Murrow were determined to raise the standards of radio journalism and steer the medium away from 1930s evangelical emotionalism — “I have hopes that broadcasting is to become an adult means of communication at last,” Murrow once told Davis — toward a vantage point that was more sober and critically detached, with wit playing a vital role.

I agree with you that recognition of guilt should be immediately followed by punishment. Unfortunately, Executive Order 9182 gives OWI no authority to hang anyone. Maybe it is just as well, since sometimes toward the close of a hard day I feel quite lethal.