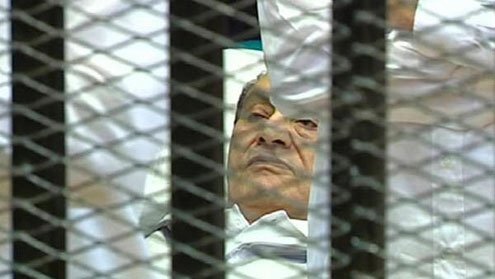 Hosni Mubarak: The necessary scapegoat.
I

first saw a courtroom cage more than 30 years ago in Turin. Inside were Red Brigades founders Renato Curci and Alberto Franceschini. Carved on the gilded judge’s podium a few aisles away were the words “The law is equal for all.” Terrorist suspects Curci and Franceschini repeatedly sneered at the judges. Both were convicted.

The peculiarity of the scene recalled the Adolf Eichmann war crimes trial 15 years earlier in Jerusalem. Israel put Eichmann in a protective glass booth that both protected him from the wrath of families and branded his contamination. The Nazi apparatchik who had ordered the mass deportations of Jews was found guilty and hung. The sentence lacked suspense.

“Boxing in” suspects for public display has long served the dual purpose of limiting flight risk — brigands and marauders once regularly raided courtrooms — and creating the visual suggestion of heinousness, and with it humiliation. Courtroom jailing is the crown jewel of systems that assume guilt and works backward.

The law might be equal for all, but Napoleonic justice stacked the deck against enemies of society and the state. The cage made little allowance for nuance. Crimes were certain. At issue was the severity of the sentence. The cage helped the public nod.

The latest cage is that of Hosni Mubarak, the aging and ailing former Egyptian president who until a winter uprising was considered among the Middle East’s more benign despots. Mubarak was no Hafez al-Assad, the bony Syrian leader who repeatedly ordered domestic carnage to stay in power. His medical doctor son Bashar is following suit.

Nor was Mubarak a Saddam Hussein, a capricious and brutal nationalist whose vendetta trial in Baghdad saw him confined to a box, like Nuremberg’s Nazis. His denials and rationalizations were heard but mocked. His conviction and execution was pro forma.

Mubarak faces similar justice, though he may well die before it’s meted out. Meantime, he listens to accusations while lying on a bed behind bars in a Cairo courtroom. He’s accused of ordering the Egyptian army of firing on protestors in January and February, an unlikely direct order since the Egyptian military dislikes being told what to do and largely acted as its own executive as Mubarak aged and grew more withdrawn from day-to-day affairs. It’s that same military that now serves as the peaceful guarantor of Egypt’s barely incipient democracy. A travesty of sorts, but a largely irrelevant one.

The Mubarak trial is the military’s human sacrifice to the revolt. To cage and execute him not only satisfies street revenge but also keeps Egypt’s potent central apparatus out of the parlous limelight.

Show trial exist for that reason — as diversions. Stalin, his entire system a cage, used them effectively for decades. It is tyrant justice that, in the case of Mubarak, munches on its own.

But trials by zeal also tend to quickly rearrange history. Though Hussein was an archetypal tyrant, he also built roads and bolstered Iraq’s chronically dazed infrastructure. Though Mubarak brooked no opposition and indulged both corruption and nepotism, he hewed to secular nationalism and oversaw major transformations in the Egyptian economy, which had recently begun thriving.

Little of this will emerge during the trial. It can’t. Controversy would make the leading man scapegoat a more ambiguous figure, compromising the absolutism on which a show trial depends. Evil needs expunging and cages the appropriate home to vampires and deposed despots. They are where some of the unforgiving public expects to see them. Humiliation is essential.

For Egypt, the Mubarak trial — though ironically managed in the tyrant’s own vein — is Big Brother overturned. Behold the once-great man of the house, the winner of everything, of rigged elections and plebiscites, made to look suddenly small and physically contrite. Listen closely, and, with luck, you’ll hear him whisper crow, or croak it.

It makes for perfect drama and serves up one-size-fits-all voyeurism. What it has to do with justice is another story.