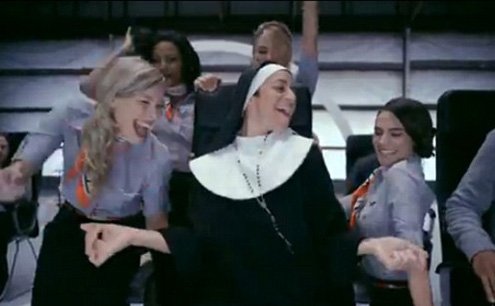 he incoming plane is late. The delay is conveyed on the gate’s digital message board that scrolls the words HEY THERE! beside a frowning emoticon. A gate attendant makes the announcement as if placating a kindergarten class. She returns to work, but the gate’s soundtrack — reggae — continues to blare. A second gate attendant arrives and the two do a little dance. All applaud.

On the plane it’s time for the security video, a sober tidbit that’s been standard for half-a-century. But this video is a hip-hop musical production featuring attendants and pilots dressed up a slithering cabaret stars. The actors dance around to catchy lyrics in which “safety slide” rhymes with glide.

The sales logic clear: keep it casual, keep it cool; make people smile; pretend to entertain them on par with their hand-held devices do. Since question, “Why be too serious?” has no answer, flip safety video dancers occupy the vacuum.

But if answers aren’t available, questions are, and none of them are particularly encouraging.

If, over the course of decades, the language of public address and communication is t-shirted back into adolescence what then happens when the time comes for urgency and seriousness? Will people hear it, listen to it, rise to its demands, or will they instead feel so estranged from bad news that severity itself will bewilder if not paralyze them?

Put another way, if once-serious messages are transformed into an adjunct of casual entertainment, how can seriousness be retrieved when the situation suddenly isn’t light?

Doesn’t exempting the voice of detachment from its obligatory formality — “ladies and gentlemen” or “attention please” becoming HEY THERE! — also undermine traditionally deadpan adult severity? In an effort to put flying customers at living-room ease, are Netflix-wannabe airlines not dubiously contracting a fake Disneyworld, den-like mood into a circumstance to which is doesn’t realistically belong?

For decades, undistracted attention was acquired by just such severity and held in place by insisting that certain things mattered over others, ensuring the mattering by distinguishing between the playful and the adult. The details of plane travel were not comic book items. Instead, the fun was in conferring wing pins to young fliers.

Now, with the development of what amounts to a society of grownup children, undistracted attention considered ludicrous to start with, which means you cannot maintain what you never had. The effort is now focused on making the once-serious amusing as if to encourage the new child-adult mind to briefly pay attention.

This is risky game going forward.

If you break the chain of formality associated with specific adult responses — whether toward the seriousness of flying or a silence in a theater — a public, any public, will gradually forget all formality. Formality will cease to exist.

When that happens, and the process has already begun, there will be no recourse to revive seriousness and structure when its revival is valuable, or necessary. Erase form and you groom a leisure-and-giggle culture effectively unable to switch gears because it knows only one.

Take airline speech. Flight attendants do not just help out, but are instead “honored” to serve. Honored? Passengers are just passengers. Honor has a different meaning, a non-casual one. Laxity and misuse have disrupted even simple patterns of address.

In long-ago 1978, Russian writer and Nobel Prize winner Alexander Solzhenitsyn gave a fiercely prescient Harvard commencement speech that all but anticipating emoticons and HEY THERE’S! Expelled from Soviet Russia, he was plunged into paradise America. But something didn’t quite click.

He was “shocked and surprised” by “hastiness and superficiality,” which struck him as a kind of psychic disease, at least collectively. With “standardized Western well-being” rebuffing mortal weight, individual challenge was diminished. Western faces were imprinted “with worry and even depression” that the commercial world, good news its mandate, naturally worked to conceal.

For Solzhenitsyn, the “search for the best ways to obtain material goods and then cheerfully get the most of them” fell short of adult obligation. “Fulfillment of a permanent, earnest duty” — life as governed by a formal sense of purpose — was necessary “so that one may leave life a better human being than one started it.” Letting Disney loose indiscriminately would eventually yield Disney-like people, in speech and manner.

Solzhenitsyn, reviled as ungrateful even at Harvard, never gave another commencement address. He retreated back to rural Vermont, ultimately returning to Russian after communism.

How then are the nearly 40-year-old worries of a brilliant Russian crank relevant to burlesque-safety announcements and 21st-century leisure-form society? Because to defeat mortal weight and moral growth you need to do emphasize one thing, the act of chilling, as well as say HEY THERE!, which, in case you missed it, is the national anthem.