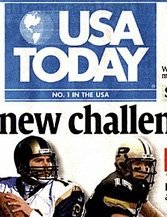 A case of piling on.
S

ince writing about my former USA Today colleague Jack Kelley, a number of things have happened — all of them generated by a link to the column kindly provided by Jim Romanesko’s Poynter.org media web site. Let me address them sequentially.

First, I received messages, mostly from working members of the American media. Many were angry that I had chosen, in their view, to defend a cheat, someone who was referred to variously as a “creep,” a “moron,” a “disgrace to his profession,” a “child,” and a “chronic liar.” Ranking editors, some friends, others unknown to me, described their sense of collective betrayal — though they tempered their words by hinting that Kelley was most probably not a well man. Second, I discussed the case with a number of colleagues here, both Italian and North American. The North Americans, while ignorant of the full details of the deception, borrowed considerable anger from reports they had read about the case. Some told me Kelley should be “disbarred,” an intriguing bit of borrowed legalese.

But it’s what the Italians said that most struck me. While few manifested any special knowledge of Kelley’s background, or even of the specifics of his contraventions, they asked me this question, though not in these words: “Why do you detest so much?”

What they were getting at, it seemed to me, was a sense of hubris operating in reverse: that the unremitting attacks on Kelley, however warranted, amounted to a kind of self-indulgent piling on that could be considered as disagreeable as the misdeeds of the transgressor. Where, they asked, in a country that champions deep love-of-life religious roots (and inveighs them against Al Qaeda), was the structural presence of forgiveness? A blunt reaction to such observations might be to note that Italy is first and foremost a Catholic country, where guilt is transient and sins can be expiated, and, more crudely, a minor nation riddled with corruption, dubious journalism, and exceptional travel page countryside.

But the spirit of their remarks has a peculiarly compelling connection with notions of anti-Americanism that some U.S. media has been peddling from Europe in the prolonged aftermath of 9/11 and the invasion of Iraq. Wasn’t Kelley, one editor here said, the product of star-maker machinery, an American Idol gone wrong? Where, asked another, was critical self-examination and doubt about method? Why was there no evident upper-tier accountability? (in “old” Europe the leader of a party disgraced by scandal usually resigns. Yes, the top editors of The New York Times left after the Jayson Blair scandal, but much suggests these pullouts were tantamount to dismissals.) One editor went so far as to say the public humiliation of Kelley was kin to the media lynching of the tyrant Saddam Hussein, because in assailing Hussein few in this or previous administrations owned up to the debt they owed him in fending off Iranian ambitions in the 1980s. Similarly, Kelley had done nothing right.

These are farfetched analogies, yes, but oddly interesting ones – if insight into the United States by non-Americans is the object of the game, and it is mine.

It is not difficult, in this climate of victim making, to understand why Italians might see America as a country fixated on self-righteous road rage, bent on rectifying betrayals and maintaining integrity using means that are hardly in concert with the spirit of correction and reform. In this way, the “you lied to us!” dum-dum bullets aimed at Jack Kelley are related to American intolerance toward all those suspected of wronging it. The visceral reaction to being cheated, and its post-9/11 neo-con extension into foreign policy, is seen here as having the upper hand over reason, and over any wish to entertain a consensus over how to run a world that has no daily substance without its doses of American bread.

This is humiliating if you are not American. It is humiliating to be berated by actions to which you must acquiesce, and not necessarily contribute to. The consequence of the acquiescence is the growing disdain for American unilateralism, even if the architects of the unilateralism are devotedly convinced they are exporting goodness.

And that’s where it is with Kelley. His accusers, who have not yet finished their layered charges, are convinced they are singularly candid, even noble, in seeking to assemble his felonies, and in so doing spare journalism further embarrassments.

What they fail to grasp is that the means undertaken to accomplish the ends – commissions, panels, boards – are gross enough to suffocate the sought-after good, at least partly, and drive the “culprit” resolutely away from rehabilitation, which was once the hoped for upshot of punishment.

Right now, with Kelley, it’s an action-movie mugging, rationalized road rage, “open season,” as he wrote to me. Forgiveness is not an option. That is the heartbreaking truth of our witch-hunt times.