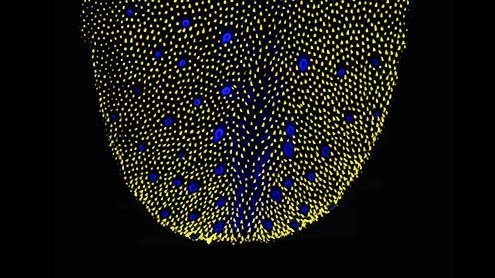 Look for the big blue circles.
I

’ve been writing about food for decades. I’ve written about what you make at home and what you eat in restaurants. I’ve covered differences between national cuisines. I’ve put together and published cookbooks. All this tasting has led me to one thought: “keep it simple” — simple food, simple praise, minimal flourishes, and polite judgment. Step on as few toes as possible. Why? It’s the right thing to do.

Criticism for criticism’s sake doesn’t do a thing. And bad reviews are unlikely to repair bad food served at bad restaurants with bad cooks that very likely won’t ever get any better. Bashing them helps no one.

That’s not to say I don’t get exasperated. No matter how polite I am, or try to be, it’s hard to glaze over an awful meal at a place you’ve read is “one of the best,” “so creative,” or “under new management and terrific.” It’s painful.

My new strategy is also simple. Whenever possible I eat in. I trust my buds. That seems to me the best way to avoid knocking overrated chefs off hallowed pedestals.

This preamble leads me to — what else? — taste buds. Specifically, they’re known as fungiform pallilae, and they’re unique to each human being. A famous Los Angeles food critic once took me through a test, published in Scientific American, intended to show how those little sensors behave on any given tongue.

You place a drop of blue food coloring on the tip of your tongue (taking care not to contaminate it with the bottle). You then swish around the coloring with a little water before spitting it out.

Soon, your taste buds will actually stand out on in a lighter shade of blue. Still on the tip of your tongue, place a ringed label, the kind that fortifies holes punched in paper (yes, they’re still around), or a small circle of wax paper with a hole in the middle. Then count the largest buds within the circumference of the hole. The number is essential.

Having fewer than 15 large buds means you’re not destined to become a supertaster. You probably won’t even be very good at differentiating between tastes and flavors. Lots of food will just taste alike (no favorites for you).

Between 15 and 30 means you have a “normal” tongue. What’s normal? Food tastes pretty good, and you know your flavors.

But those with more than 30 belong to an elite group whose buds pick up on everything. If you’re in that group, sweet, sour, bitter, salty and savory each make imprints not only on your buds but on the 50-to-100 receptor cells that feed taste to the brain. Interesting, no?

Being in the hypersensitive bracket is a mixed blessing. Bitterness and other flavors are greatly enhanced. Some of my likes go against the grain.

Take the pungent herbal liquor Fernet Branca. Some find it shocking. I love it.

People who tell me they don’t really care for certain foods they’ve been eating for years make me wince. Given my seismic tongue, it’s hard for me to imagine that tastes wouldn’t register.

But taste can also be interfered with. People who use nose sprays against allergies risk damaging their buds — having a cold, for example, sometimes kills taste for a day or so, leaving you with no love for the chicken soup that helps cure you.

When I do get out, my buds send me in specific directions. In Rome, I want a trattoria that serves perfect spaghetti alle vongole. In France, it’s all about cassoulet from the kitchen, not a jar. In Texas, it’s perfect tacos — with a base of slow-cooked shredded pork with green chillies.

But finding places that suit my buds — ones that serve fresh and simple food — is getting harder. These days, I jokingly tell friends I’ll eat anything but monkey brains and live insects.

I might even eat those, though I know my buds might object. But because they’re my buds I also know they’d adjust.