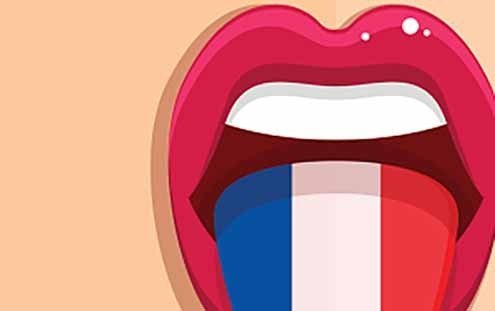 The repressed sounds of your first language can come howling back.
A

s you age you revert to your native language. The words you heard as a child carry over like the “one” in scribbled addition. My dreams have revived their accents. People say mouillé, arraché, crevé, flic, fric, gatté, morceau, roulé. Bateau and soutien gorge get along improbably. My dream people speak whole and slangy sentences about how wet tires are flat and how spoiled cops dwell on dough until being delighted by slice of something they snatched before driving off to board a boat, maybe with someone in a bra.

In this eclectic conclave, one word sticks out — gate, which is what my mother said I was. How I became spoiled in Paris of the late 1950s is anyone’s guess. Blame it on the nanny’s bra.

A nanny who in one dream made appearance just to hush me until the tire blew and cake was served, after which she kissed me. Blame that on my mother.

Suppressed for decades, my Paris years are eager for a comeback before it’s literally too late. These long-imprisoned early years are on to something about the passage of time and mortality. Rats on a sinking ship, prodded by the scent of familiar accents, they forage for lifeboats when my Rome lights go out.

That light never went off in Paris, at least not the nighlight. I couldn’t sleep without it. I’d scream and weep. I’d beg for my nanny. Gatté. Ages one to five were all about defeating darkness, since for whatever reason the Parisian night scared me silly.

We left for America just before 1960. We traveled on a big ship. A French ship. I frolicked in the elevator, making friends with the elevator bellboy, who dressed in a red and white uniform. On y vas, he’d say, and we did, deck-to-deck. He’d let me pull the levers. Le prochaine pont, I’d announce with authority. Next deck. Once I spilled a man’s drink. Mouillé. Spilled cognac. A scene followed. Tu laisse l’ascenseur cet instant, compris? — that was my mother, and from then on I did as told and walked (albeit peevishly).

In America, my French was papered over by a school that taught in English intent on stamping out all Gallic roots. The school’s goal was “the polite, English-speaking child,” and in the end, despite delaying tactics and various acts of terrorism, it won out. I wasn’t necessarily polite but thoughts of spilled cognac in elevators vanished.

I became an American kid on an American block with a penchant for model battleships and bubblegum. Paris had given me neither models nor gum so I promptly dumped both language and accents. American boys ate slices of cheery pie and later blew tires. No crevé for them. A flic, spelled with a “k” in English, was a movie, not a cop. My humbled French went underground.

Until the dual machinery of vanity and insecurity — the raison d’etre of all suppression — aged to a standstill. When that happens you actively retreat from most pretense and let your early math out of its dungeon. In politics it can turn you into a nostalgic reactionary.

In dreams you’re often sent back to square one, a scrambled mess of early tones, parental lessons, nannies and lukewarm baths. You look out your dream’s most open window to see a huge slice of cake, which you suddenly want so badly to eat, if only you knew the word for slice. But you don’t, not in this dream. So instead you go for what you do know, the word morceau, and you swallow the 1950s slice with abandon.