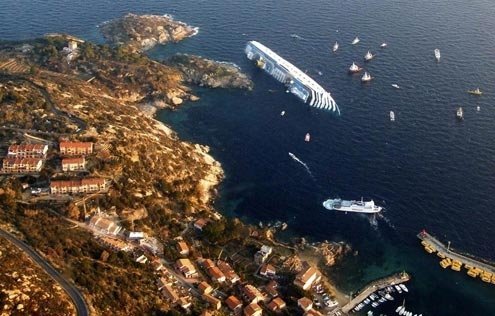 Much too close…
S

teering a massive cruise ship anywhere near rocky shoals is a very bad idea. It is also a wonderful piece of voyeurism: Land and sea seem to coalesce until the mighty liner skirts harm’s way, or fails to. Cruise ship travel depends on merging luxury hotel standards with theme park values to create high seas distractions that amuse hoards of multinational guests whose principle interests are social life, exotic ports of call and pretty landscapes as seen from a ship.

But the Costa Concordia, which ran aground off the Tuscan coast near the popular Monte Argentario promontory, wasn’t just any ship: She was a 950-foot, 114,000-ton vessel, far larger (and uglier) than most of the transatlantic liners that once ferried passengers to and from the United States in ballgown-era style. For those lapping up Titanic disaster analogies, Concordia was not only bigger but also fatter, a typically obese, barge-like cruise liner built wide — 25-feet wider than Titanic at the beam — to entertain sprawling fitness centers and discos. Such squat, bulbous, top-heavy ships are vulnerable to outcroppings and can’t absorb mass flooding without quickly listing, the waterborne equivalent of an aircraft tailspin.

While it’s too soon to know the progression of events aboard Concordia, it’s safe to say Mediterranean cruises are more sport than vocation — the Mediterranean is kinder than the Atlantic — and passengers closer to revelers than veteran seafarers. Cruise ship crews are also a mixed and multinational bunch, many typically hired on the cheap. European and North American visitors flock to these quick-vacation cruises, many of which usually begin in Italy or Greece. Shortcuts and the cruise industry have never been strangers, all the more so since cruises exist to amuse. PR dares — including a close encounter with an island — can trump responsibility, which looks to just be what happened when big Concordia nicked a notoriously jagged piece of island rock called Giglio.

Passenger accounts suggest the crew knew little about the vessel’s safety procedures. Once the vessel took on a list, all turned chaotic. Even the captain fled.

At the same time, large ships with deep gashes are like humans with massive hemorrhaging. The bleeding can happen fast enough to unsettle even veteran doctors. The Titanic absorbed a 300-foot iceberg gash but still took nearly three hours to sink; the problem in Titanic’s case was insufficient lifeboats and the rigor mortis North Atlantic.

Concordia had all the boats and rafts it needed, but found itself with more Lusitania-like woes. In 1915, a year into World War I, a German U-Boat torpedoed the Cunard liner in the Irish Sea shallows. Most Lusitania students insist one primitive submarine torpedo wasn’t enough to sink it. They insist a second blast, probably on-board munitions detonating, blew open the hull. Wounded Lusitania vanished in only 18 minutes, killing more than two-thirds of the nearly 2,000 passengers aboard. A German warning that British merchant steamers were “liable to destruction,” published in more than 50 American newspapers, went unheeded.

In 1956, the Italian liner Andrea Doria collided with the Swedish arctic liner Stockholm in heavy fog off Nantucket. Gashed by the Scandinavian ship’s ice-breaking bow, the Doria began listing but took most half-a-night to sink. Passengers who survived the initial impact were rescued.

All three incidents were cautionary tales. Arrogant Titanic plowed unwisely through ice fields, Lusitania ignored a war, and Andrea Doria was undone by radar misreading. The Titanic disaster led to the creation of an Atlantic ice patrol and the bolstering of the U.S. Coast Guard.

By daring an island, Concordia played by century-old Titanic rules. The immensity of modern-day cruise liners implicitly suggest 1912-style invulnerability. Add the generally calmer waters of the Mediterranean or the Caribbean Atlantic to the mix and you get occasionally foolish love boat managers. If anything, they fear fire. But liners still have hulls. Gash them extensively and they list, capsize or sink — sometimes all three in short order.

Titanic’s fate had a commercial explanation, albeit miserable: Its builders and commanders were determined not to slow the pace of the new liner’s maiden run from Southampton to New York just because of ice. Ocean crossings were on a prestigious clock. No time constraints loomed over Concordia. To make a passenger splash, it dared land, and land — probably an uncharted reef — bit back.

While the International Air Transport Association jealously monitors global civilian air travel, the life and times of cruise liners are often governed instead by the non-uniform rules of the vessel’s home port. Not even Costa, a reputable company, is exempt from loopholes.

The lesson of Concordia, using Titanic as a measure, has little to do with the movie-style histrionics that have cropped up since the incident. Instead, it represents yet another invitation to create more uniform and rigorous safety standards for cruise vessels, including systematic training, airline style, for crews, as well as coastal navigational guidelines that bar a balloon from being floating toward a needle, which is what happened with Concordia.

Land is land and sea is sea. The two should avoid even casual flirtation, lest the kiss turn into a bite.