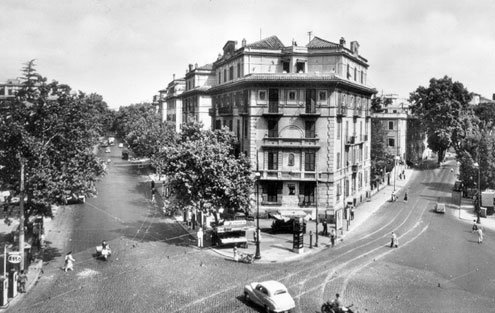 ife is Cool Subdued. That’s the full name of the clothing store at the corner of my street. It mostly sells overpriced jeans to mobile-toting teens who couldn’t pronounce anything but the “cool” part unless coaxed or drugged. In Italy, “life” is “leaf” and “subdued” just isn’t.

LICS, as I call it, replaced a sprawling Baroque antique shop that sat on the same corner for two decades, part of a glassy mini-mall that went up in the mid-1970s.

Iberia, the Spanish airlines, rented an office in the complex until Basque separatists shooed them away with a small bomb. The misfit explosion gave the antique-store owner a chance to preen on TV (“They ruined my Persian rugs!”). He dusted tended to the rugs for another decade before selling to Life is Cool Subdued.

As far as I can tell, LICS specializes in new and designer-torn Jeans and tank tops as well as an assortment of bizarre elastic lingerie whose purpose I can’t imagine since it’s draped over sneakers. Together, the sneakers and the lingerie form part of the Life is Cool Subdued collection, which I’ve been told is cooler than a similar one at Brandy & Melville, a LICS-like store down the street.

B&M, yet another tiny emporium, peddles highbrow accessories to the local parents of upper middle class girls. For a while, B&M peddled “Snatch,” a silky sweater line, and “Fuckin Criminal,” thick belts with unsubdued attitudes. I often B&M often on the way to the supermarket, watching as mother and daughter look-alikes drift in and out of its slit-like door.

For 50 years, the same slit led into my doorknob-rich local hardware store, a family enterprise with a father behind the counter, a mother as cashier, and long-haired sons handing out nails, hammers, screws, and sandpaper, called “carta vetrate,” glass paper, in Italian.

One day, B&M’s ambitious owners (they have stores in London and Malibu) made the hardware store father offer he couldn’t resist. Translucent straps and other social essentials soon replaced the glass paper. I mourned, for no other reason than the hardware store people had always helped me with my linguistic handicaps. I’d explain the length of the nails I needed by widening my fingers. “It’s the American with the fingers again,” the owner would laugh.

The B&M transformation seemed to occur almost overnight, in languorous late August or perhaps early September. Romans used fear an August coup. Now they want one. “The only way to rule this country is through dictators,” a cab driver told me other day. “Let’s just say we tried democracy and it didn’t work.” He also told me about the government machines that cause earthquakes. “Why do you think the mayor wasn’t in L’Aquila, or even the parish priest?” I didn’t answer.

LICS and B&M have themselves been quiet lately because January-March sales season just ended. Girls now browse but usually leave the store empty-handed. Some walk to the nearby perfume emporium that I cheerfully call Muskville. There, being squirted is the rules. Some girls don’t want to be squirted because they’re on the phone. Life can be uncool.

Muskville was once a small coffee bar owned by a man with a mustache and later a store that sold pots, pans and sundry kitchen utensils. For a brief time it was a travel agency that specialized in North African vacations. Now, the block now consists of bank, perfume store, bank, and bank, in that dull order. Around the corner is Bunny’s Sun Center.

If you don’t want money, perfume, sun lamps or Fuckin Criminal belts, there’s chocolate store nestled beside the movie theater that for the last two months has seemed to love only “Avatar.” I like the chocolate store because it seems to sell just chocolate. It’s also the last store on the block that hasn’t changed hands, along with the florist, but even he’s beginning to waver.

Where has courtship gone? he muses.

I point in the direction of LICS and B&M. He grins broadly, craning his shiny bald head, and slaps a palm to my shoulder blades. We’ll never be cool, God-forbid subdued, but we’ll always be friends.