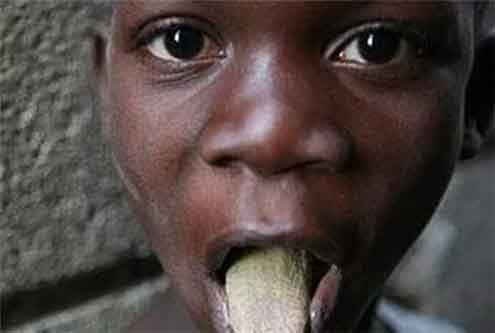 In Haiti after the 2010 earthquake (and to this day), children still eat mud.
M

y husband has a thingy he says after I wax poetic about the value of iron in my mother’s magic, five-minute recipe for liver-haters (it wins them over forever), or the importance of zinc in toasted pumpkin seeds, or the healthy qualities of pasta sauces made with fresh greens.

When, I wonder, did they go astray — the fanatic foodies that decided to eschew (and this is the short list):

How can we all reclaim these lost souls so they simply enjoy what’s been served, no matter what it might be (particularly if they’re guests)? How do we break the terrible hold that food aversions have on so many? Even if we’re living 30 years longer thanks to vaccines and antibiotics, life is still too short for food exclusion.

On the very rare occasion I encounter something I don’t want to eat, I’m still grounded by one, very old-fashioned thought: Some children on this planet eat dirt for their protein. During World War II, the Dutch (half-Dutch Audrey Hepburn among them), starved by the German embargo on foodstuffs, subsisted on less than 600 calories a day and felt the effects throughout their lives, even when they finally regained some of their health. An estimated 22,000 Dutch citizens died of hunger.

What an incredible luxury it is to be able to pick and choose one’s foods. How remarkable it is to be in a position to request sauce on the side or well-done steak or even “hold” the cream, butter, or olive oil.

Once, in Rome, in Italy, land of some of the world’s most perfect foods, we had a visitor who said, “Eweh… don’t use so much olive oil — it’s so greasy!”

Just the other day, we had family visiting from San Francisco. Since they’re incredibly aware of foodie movements, I was waiting for the shoe to drop about eating preferences. What a breath of fragrant air to hear, “Oh, we eat everything, we just love food.”

Makes it especially easy on the hostess, a sentence like that.

I often think of what people miss when pickiness sets in. Almost any vegetable in the world, roasted to a tender golden brown in olive oil, then sprinkled with salt, lemon, maybe a little parmigiano, can usually win over the most finicky eater. Okay, all those oohing and aahing over their vegetables can stay on the A list.

So here’s a test to see how open-minded you are about “suspicious” foods and whether you might be willing to take a step toward a more adventuresome approach.

You have to use calf’s liver for this experiment and I admittedly struggle to breathe when I think about little animals in tight boxes taken from their mothers to fatten up for our tables.

Hoisted on my own petard, I am. But think on this, too. If you were a starving child in any one of the many areas of our planet in which dirt is sustenance, and you were given a little plate of tender liver, cut into cubes, tossed in flour, salt, pepper and paprika and sautéed quickly in hot olive oil to a crispy finish with just a touch of red wine and a sprinkle with fresh parsley to round out the flavor, would you say, “No, I hate liver?

This might not be a good example. The child could end up hating liver later on. Still, if we could take a good look at the bounty on our tables and try not to discriminate against the riches we’re so fortunate to have simply because we’re told bread is fattening, we’d all be happier.

Oh, and if you find me a liver-hater who, after tasting my mother’s five-minute recipe, says that he or she still despises liver, I’ll eat my hat.