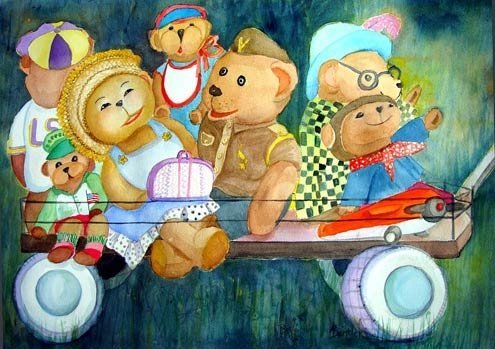 He's bothering me! one brother yelled of the other from the far back seat.
F

or a few years in my early teens my family’s vacation consisted of packing into our forest green minivan for long road trips. The large red cooler was full of ice, snacks, lunch, and dinner; it fit snugly in the space near the sliding door. My brothers and I had our entertainment, like books and Game Boys, until those became boring and we began bothering each other.

One year we drove south from Michigan to Tennessee and Kentucky. Next year we drove north to Montreal. When we flew to more distant states or countries we usually repeated the situation in a rented car.

My parents in the front seats were in charge, more precisely, my dad was. My dad drove highways and snaked along the forested roads of Appalachia and the Olympic Peninsula; he switch-backed the Hana Highway in Hawaii, 620 curves over a stretch of 84 kilometers. He economized on bathroom breaks and kept the peace between my brothers with a strong voice.

“He’s bothering me!” one brother yelled of the other from the far back seat.

All five of us shared hotel bedrooms in most places we visited, because that’s what you do on family vacation — you shack up together and get close, belly to belly, bile to bile.

It seems that neither growing up nor a parents’ divorce can shatter the tradition of the family vacation. The family morphs, the circumstances change, but there it is, that traveling together all the same.

The week before Easter my dad came to Rome with his wife and her teenage daughter who brought a friend. After three days in Rome we headed to Florence, from there we took a train then drove into the Dolomites. My dad has always been ambitious with his vacations, wanting to see as much as he can in the amount of time allotted him.

I sat beside the two teenagers as he drove up through the Dolomites. As we rose, the vineyards that lined the highway became apple orchards nestled in the valley between peaks. We were a mixed bunch — different than my family vacations of old — but so much felt the same, even without the red cooler, without my brothers, without the forest green minivan. I was a kid again. I was sitting in the back seat as my dad drove us to someplace no one had been before.

But my role was different now. I had organized much of the trip. I was their translator. In restaurants I suggested what food to order and often times ordered it for them. I led them around cities and through train station crowds. My Rome apartment became their hotel while I moved to a friend’s place across the city.

One of my favorite parts of the trip was a… bed. We had stopped in an agriturismo outside the small town of Cavalese, in the Trentino near the Austrian border. The bed was near a window that overlooked a view of the forested mountains getting dressed for spring. I lay down to read for as many hours as I could steal, oblivious to what everyone else was doing or wanted to do, glancing occasionally at the rainy mountain landscape.

Family vacations occupy a strange space between childhood and adulthood, especially when the vacation is also a visit. It’s not as simple as it once was: I can’t be carted around without protest; there are personalities to adjust to. My own psychological layers and those of others stand out in disturbing relief. But maybe the complexity brings more meaning to the moments, shared because we’ve consented to sharing them, so that when the sharing is over the missing begins.