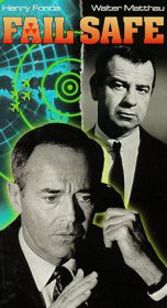 A landmark and (then) terrifying Cold War saga in which there are no winners. American B-52s are scrambled when computers suggest an imminent Soviet attack. The computers are wrong, but the jets have passed the so-called “fail safe” point and cannot be recalled. When they bomb Moscow, the U.S. president must decide how to forestall a wider nuclear conflagration. His decision is appalling lucid.

Sidney Lumet’s powerful thriller is dated neither in substance nor humanity. The movie is based on a novel with an lasting premise: We live in an age of advanced machines, but machines can break down. Henry Fonda and young translator Larry Hagman have a memorable segment in which Fonda talks to the Soviet president (whose voice you never hear) and Hagman relates what been said. It’s sobering theater by both men.

All the pilots are excellent, though Frank Overton is particularly moving as General Black, who is called on to do the unthinkable: bomb an American city. While Stanley Kubrick’s “Dr. Strangelove” captured the lurid folly of the nuclear standoff, Lumet’s movie remains a monument and an admonishment. The material so impressed George Clooney that he recreated it in a 2000 TV movie presented live and directed by Stephen Frears.