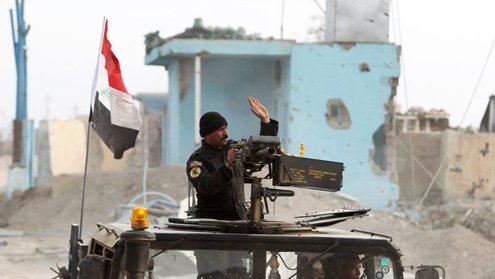 In a decade of war, the U.S. lost 4,500 men in Iraq, about the number of casualties the recent fight for Ramadi has claimed in a fraction of the time.
A

s many in the West busied themselves watching the reams of galactic combat offered up by the latest episode of the “Star Wars” saga (ironically a Disney caper), Iraqi troops recently made their latest and finally successful thrust against Islamic militants holding the city of Ramadi, dislodging most of them — at least for now — after more than a year of fierce combat.

While the latest “Star Wars” was everybody’s news — along with November’s Paris casualties — the hurt in Ramadi (an estimated three-to-5,000 dead on both sides) appeared on far fewer radars. That’s understandable in Western media terms since the combatants were faceless Iraqi soldiers pitted against similarly faceless extremists. The blood spilled in such battles, whatever the outcome’s strategic value, has no agency in a West concerned only with the wellbeing of its own citizenries.

Paradox and irony fail to describe this gulf in sensibilities. Humans traditionally care only for their own “kind,” glad to tune out savagery elsewhere, and even gladder to applaud far-away bloodbaths, so long as baddies lose.

What’s harder to reconcile are the thousands of lives being lost in a distant but full-scale war when juxtaposed against celebrated video wars in which evil troopers of all kinds do battle with their noble adversaries, digital explosion and death the norm. In this sense “Star Wars” is the greatest and most surreal of spectacles: galactic armies and rebels smashing enemies and planets to smithereens amid laughter and whooping.

Yes, that’s entertainment, and war can be a funhouse on screen. But the gap between any educated comprehension of what actual war (not passing terrorism) entails and its Western fictional status has widened to the breaking point, making terrorist acts effective if not necessary tools for adversaries eager to have an effect on affluent, well-defended societies. It’s the only weapon they possess in an effort to send a selfie of a separate reality.

As for real war, the reoccupation of Ramadi was an all-Iraqi affair, mostly because the West now refuses to lose its own soldiers. Better to send a drone, dispatch bombers, or find proxies. Better to find anything but endure the direct consequences of combat. As offensive as random terrorism might seem, and is, proxy-ism can seem just as cowardly — at least among those still willing to go to war to get what they want, or to retrieve what they think they’ve lost.

The Iraqi army, dismantled after the fall of Saddam Hussein, has only recently regained some of its clout, mostly thanks to U.S. weaponry and training. Yet much like its ISIS enemies, Iraq’s troops are a force of loose cobblestones. What is not loose is the fighting between them.

In a Western world unable to comprehend the daily bloodshed in Iraq and Syria (and elsewhere) yet still aroused by violence, the make-believe hostilities of “Star Wars” and video games supply a steady source of adrenalin on loan. For parents wary of addictive gaming, “Star Wars” is the more wholesome route. Seven-year-olds can get a two-hour-long fix of make-believe Disney apocalypse and come away chipper.

What’s unsettling is the extent to which combat is now abstract, part of a different alphabet that might as well form gibberish — which in turn makes terrorism seem aberrant or warped when it fact it’s an extension of real battlefields in which tens of thousands of soldiers and civilians perish as a matter of course, and where, if shot, you fall down and stay down, no director’s cut to rewrite the ending.