Defense of the Realm 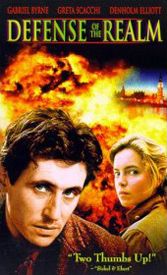 The legacy of anti-nuclear Labor and contempt for the American nuclear presence in 1980s Britain loom large in director David Drury’s skillful thriller. Newspaperman Nick Mullen (young Gabriel Byrne) discovers that left-leaning MP Denis Markham (Ian Bannen) shares a prostitute with a KGB spy and blows the whistle. But veteran reporter Vernon Bayliss (the grand veteran Denholm Elliott) boozily tells Mullen that the Markham affair isn’t as straightforward as it seems. The subtext of the movie is a strange and hushed-up shooting incident at a U.S. air base. When Bayliss dies suddenly, Mullen begins digging and enlists an improbable ally in Markham’s secretary Nina Beckham (Gretta Scacchi in her prime). Drury keeps his stars in a state of anxious alarm, which suits both the conspiracy theory mood and the ending.