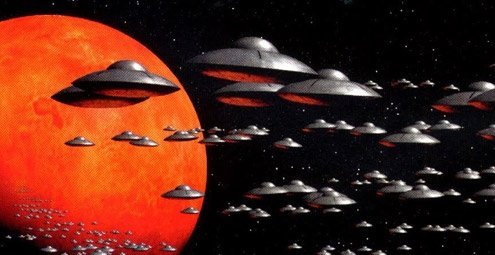 cientists are increasingly sure there’s no methane gas on Mars. So says “Curiosity,” the unmanned crab well into the second year of an unorthodox and somewhat lonely Martian road trip. The missing methane is a slap in the face to scientific and fictional Martian chronicles. No methane means no life and no potential Martians, which also means no war of the worlds. But the downside is a kick in the face, namely that we might be the only game in town, at least nearby.

Yes, Hollywood special effects long ago paved the way for Yellow Brick Roads wormholes extending into genital woodwork imagined as teeming with eager androids and their Russian model-like companions. But in the “them’s the facts” world of the known cosmos, things are far less sexy.

Mars, after all, is a quaintly jagged planet located just down the road. It has Earth-like features and long ago insinuated itself into the alien debate. Venus was another candidate, but an unlikely one unless you liked burned toast (and models don’t). Mercury, meanwhile, was (and is) the toast itself. More exotic suburban outposts, Jupiter, Neptune and much-mocked Uranus, were mostly known as colorfully noxious outposts hospitable only to the likes of Syrian nerve gas. Poor Pluto recently lost its a planet status and has been in group therapy since being labeled a dwarf.

What “Curiosity” appears to be saying, or trying to say, since unmanned probes can’t talk let alone giggle, is that if humans thought Mars was the “it” planet, they’d better guess again, or stick to wormhole videos.

Assuming the crab is right, and that scientists are also right about tying life to methane — and life is a gas, literally — then it’s possible the great acreage known as the Solar System contains only one humanoid species, earthlings. That would put both Klingons and Barbarella on the ropes and mean we’re stuck with ourselves for the foreseeable future.

It would also mean that humanity itself isn’t just unique in its hopefulness, optimism and propensity for self-destruction, but also unique in a more absolute and far less cheering way — perhaps no more than a one-off test of infinity’s emergency broadcast system. If humanity’s “single” status holds, when it vanishes — and it will, since even the sun is on a clock — Russian models and their clones won’t be around to reignite the species. The Jewish side of being is also nullified, namely human as part of a chosen, sure-to-survive tribe intended to explore, extend, conquer, colonize, procreate and generally exhibit enviable ambition.

If we’re alone and unenvied, bereft of solar system partners, whether ET or invaders, then tech companies are right to make human life into the distracted sum of mundane transmissions permeated with me-first gas. Maybe Steve Jobs knew all about the methane quandary when he and his mortals tackled the early phases of artificial intelligence.

At the same time, not having anyone listening in, hiding in a celestial broom closet, someone or something to aspire to befriend (or argue with), has a demoralizing side. It can make science fiction seem like self-indulgent aside that an unpopulated universe sees as trite, atomically eager for humans get over themselves and surrender to the next big bang. It can force human exceptionalism, akin to American exceptionalism — the idea that humanity is the universal cat’s meow — to go the way of dinosaurs, whose existence ironically helped generate the outsized imagination that humans later assigned to life on other worlds. But such premises always assumed other worlds not only out there but also somehow game, if not secretly complicit. What if they’re not and not?

God-cheerers and afterlife salespeople will ignore both “Curiosity” and Mars, insisting that the “true” life continuum is unrelated to other planets but contained in a methane-free spiritual dimension. Life, to them, is a grander totality that merely rents a room in the cosmos to amuse itself. Humans are their own God particle. It’s a natural and necessary argument to keep future generations from snacking on Pluto’s anti-depressants. Meaning is no fun when you’re meaningless.

Yet that’s why crabby “Curiosity” is onto something biggish. Since Enlightenment times, humans have assigned meaning and mattering based on being at the start of something. Human intelligence and self-discipline were considered cracks in a door that would eventually swing wide open into something surely transcendental, as in an “us” available to a “them.”

But what the “sorry, no methane” message hints at, at least to those bent on identifying a larger human message and purpose, is that self-absorption has its limits. “Curiosity,” which seems fairly blunt, appears to be telling humanity to take a deep breath and get over itself. Though cosmic ingredients are endless, life may not be the rule. Look at the stars, by all means. Just don’t think you’re one of them.