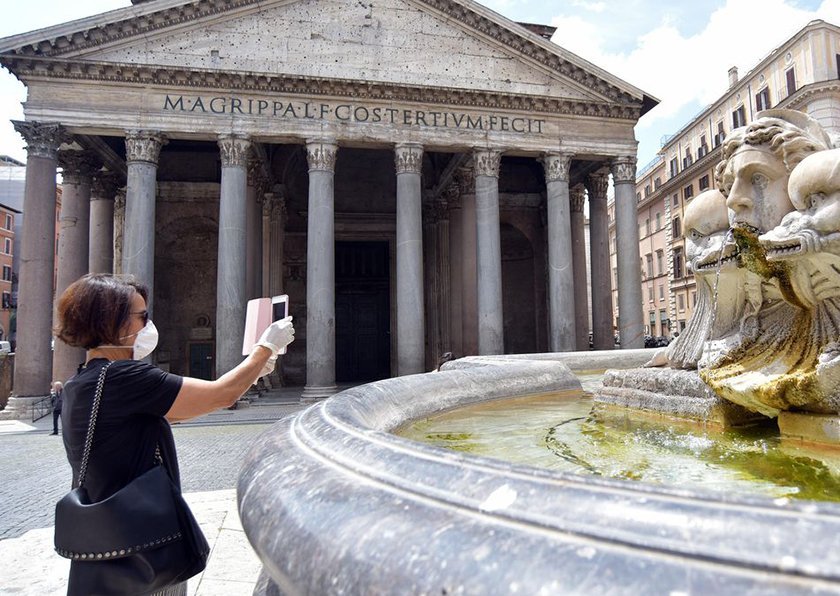 Full-blown Rome tourism may take a year or more to make a comeback.
N

ow that I’m finally back in Rome after months of California exile, it’s time to address a few basic coronavirus questions, about testing in particular.

For example, want to find out if that “flu” you had in March was actually COVID-19 before you even knew there was a virus on the loose?

That’s now possible in Italy at your convenience, but — caveat emptor —at your own risk. Walk into any of the dozen or more private labs in Rome that offer antibody testing (places like Bios), hand over some cash, stick out your arm, and the deed is done.

If that’s what you choose to do, here’s a practical recommendation: find somewhere that uses the Abbott brand, supposedly 99.9 percent corona-specific (and yes, I know, it’s the same Abbott that makes a notoriously unreliable swab test, so don’t accuse me of drug company PR).

Other manufacturers claim a 95 percent specificity rate, which in layman’s terms represents the degree of accuracy in measuring negative results. The 95 percent number may sound good but trust me that it isn’t, not in a place like Rome, where estimates suggest fewer than 5 percent of the city’s nearly three million legal residents have been exposed to the virus. As a result, all too many non-Abbott positives will turn out to be false ones. In medicine, a 5 percent margin is a chasm.

People can remain swab-positive for weeks or even months after contracting COVID-19.

One Rome venue that offers the Abbott test is the Centro Diagnostico, near the Pyramid. No appointment required, just show up before 11 a.m. with €25. There are others, so do your shopping.

But let’s now get back to my tell take “at your own risk,” since by now everything regarding COVID-19 seems to involve some kind of risk.

Italy has decreed that anyone who tests positive for antibodies must isolate themselves until they’ve done a swab test for the active disease and tested negative. This is madness, at least to me, because by the time a person acquires IgG antibodies (which defend against the coronavirus) they’re no longer contagious.

But it gets even better.

How you should respond varies by region. In some, including Le Marche (on the country’s east coast, capital Ancona), your general practitioner has the authority to let you off the hook if you’re also tested for the early IgM variety antibody, and result shows you have none. In other regions, Lazio among them (and Rome its capital), the GP has no leeway at all. Anyone with any kind of antibody is stuck at home until they’re proven swab-negative, which can take many days.

But the complexities and possible complications just keep on coming. All swab testing must go through a doctor who belongs to the country’s National Health Service, and many people (maybe even most) of my patients are foreigners, or are Italian United Nations employees who aren’t on the National Health Service registry roles.

Another complication is that a positive swab test result does not automatically make you a virus carrier. People can remain swab-positive for weeks or even months after contracting COVID-19. “Late” swabs often detect only fragments of the virus, not infectious organisms. In fact, it’s so unusual for COVID-19 to be transmitted late into the disease’s cycle that the World Health Organization as well as the American Centers for Disease Control allow patients to return to work without testing 10 days after they first developed symptoms, or 3 days after they feel they’ve recovered.

Then there’s contact tracing, part two of the epidemic-buster’s mantra. The so-called Immuni Contact Tracing App is now available in Italy. In Germany, it’s the Corona-Warn-App; in France, the StopCovid. That said, the only place people are signing up in any significant numbers is in Germany. Britain has thrown in the sponge on apps over technical glitches, which are seen to make them unreliable. These apps are also severely limited in scope. They can put users at risk of both false alarms and false negatives. No matter how cute they may sound, they’re a very poor substitute for boots-on-the-ground contact tracing. In the U.S., things are, as usual, mess (a word you might have chosen to associated more with Italy until this year). The apps haven’t taken off at all, and while determined Washington State health officers have proven that it’s possible to do real contact tracing, New York state has so far fallen flat.

In more ways than many, COVID-19 testing is still very much a work in progress.