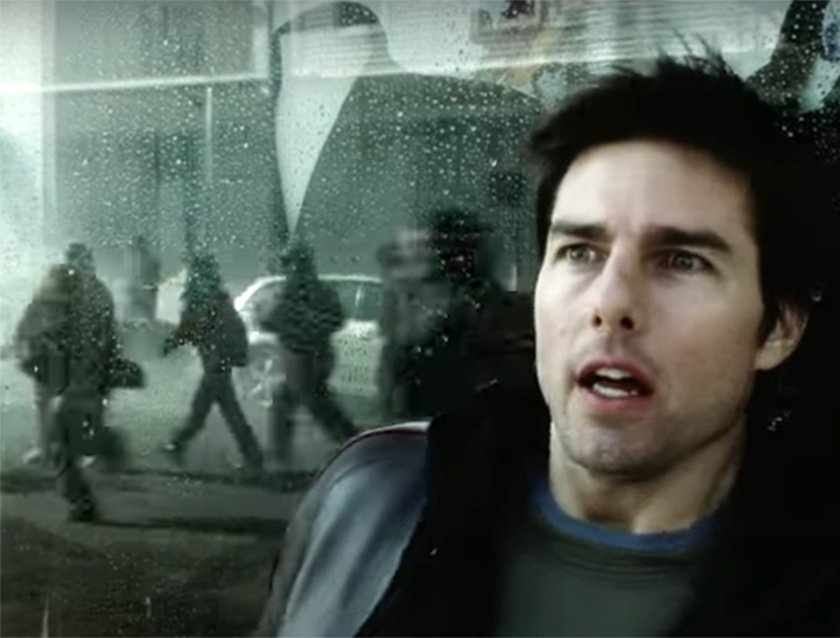 was always a fan of apocalypse movies. Not the kind that overwhelms you with monsters and aliens, and special effects to die for (literally), but the kind that makes you believe something is very, very wrong and isn’t likely to go away even if you close your eyes. I like flicks that measure off-the-charts high on what I call my SCABET meter, a mental Geiger counter I carry into every movie that purports to be scary, usually with mixed results, since it takes special circumstances to amp me up. SCABET stands for “surprise, concern, alarm, bewilderment, terror,” and how these factors conspire to make their appearance and then escalate. Basically, I’m interested in what happens to normal people when they’re suddenly faced with extraordinary circumstances they can do nothing to rationalize or control. They might try to flee; they might try to play hero, if only not to think about things; they might resign themselves to the situation and become depressed, only to discover they can’t shake the terror.

In every film that makes my SCABET list, the characters, are at one time or another, convinced they don’t stand a chance, and mostly they’re right.

There’s a long list of movies that fall under my rubric, and trying to cover even a sliver would take a decade. Instead, I’m giving you a thin slice of a sliver, bits and pieces of three movies that still unsettle me, years after I first saw them. It’s a highly subjective mini-list that any movie lover could scoff away by saying, “That one wasn’t half as scary as X.” But all I’m doing here, in this time of “covidity” (a word I’ve invented to cover insidious fright) is sharing some memories. My interest is less in actors and directors and cinematic method than impact, how a story uses building blocks to create situations that can eat you alive.

First on the SCABET chart is Peter Weir’s 1977 “The Last Wave,” one of the Australian director’s early efforts, before he scampered across the Pacific and made it big in Hollywood with intriguing blockbusters like “The Truman Show.”

Weir’s story is about a Sydney lawyer who, for no apparent reason, finds himself defending a group of Aborigines who’ve been charged with the murder of one of their own.

Weir plays tricks from the start. The lawyer, David Burton, usually deals with tax cases; he shouldn’t be within miles of this case, but he’s lured. Meanwhile, something’s also very off with the weather. Strange winds and storms have been kicking up all around. No one knows why. Burton has had strange dreams. He also feels an implacable affinity to the laconic Aborigines, who seem to want something from him.

The deeper Burton digs into the lives of the semi-feral men, the more the story overlaps into mysticism. The more he thinks about who these men might be, the worse the weather gets.

Forbidding and foreboding are essential to SCABET, and Burton (Richard Chamberlain) hits all the right notes.

Chris Lee, the high priest of the group, is certain Burton is not Burton at all, but the representation of an ancient prophesy in which the continents of the Southern Hemisphere are wiped out. It then emerges that Burton was born in South America. Drawn into their (last) rites, he gradually becomes the prisoner of dreams presaging the end of days.

Special effects were not an Australian strength, and Weir no master. None of this matters because a sense of primitive menace increasingly forces Burton, a well-off middle class white man, into a world he’d prefer not to reckon with. But he’s sucked into it nonetheless, like a man so fascinated with the horrors of a disease he’s willing to infect himself to know how having it feels.

Burton will eventually fight with Lee. He will reject his posited role as an Aboriginal Shiva, a destroyer of worlds. He will flee to that frequently benign spot films often use to offer a reprieve, to offer comfort and cleansing, a beach. But for Burton, there is no escape. On that beach, Burton, who has scurried through a sewer, will wash his filthy face. And it is at this precise moment, already fraught for several minutes, that Weir delivers his final blow, and its arrival is signaled as much by the look on Burton’s face as by the primitive effects. Pure SCABET. There’s no going back, nor any clear indication of the path that led to the inevitable climax. Something larger is at work, for which there’s no vaccine or rational remedy. Burton goes too far, but must make that end-game pilgrimage to discover that self-defeating truth.

So yes, do take your dreams seriously.

There’s a good bit of SCABET in Matt Reeves’s 2008 “Cloverfield,” a found footage flick that gets its power from its unwillingness to tip its hand early.

We know this is post-apocalyptic footage, so no mystery there. We know nothing good is on the way (the film is from Defense Department archives showing “the area formerly known as Central Park”).

Reeves has thrown together a group of youths as they party (and film) their way through an urban night out. It’s a farewell party for the brother of one of the characters. There’s booze and chatter alongside youthful self-indulgence, anchored around the premise that nothing can go too terribly wrong on such a night (aside, say, from a fight over a girl, or some other human mishap). The video makes the party action into low-brow narcissism, at times tedious and (intentionally) without focus. The camera runs riot and little of substance develops, to the point the footage threatens to drown under its own banality.

Until, that is, something not quite right comes knocking. News about a capsized tanker. A blackout. The city’s nighttime normalcy seems suddenly askew. Laughter is muted, then set aside. The youths remain skeptical, even amused, eager to participate in this party-within-a-party. Reeves wisely takes time to ponder this youthful skepticism, only slowly prodding out the fear and incredulity, both key SCABET ingredients, before finally letting his Godzilla into the room. This he does with ferocity enough to overturn the previous 40 minutes of frivolity. All is now a matter of survival, destined of course to fail.

These transformative moments, between carefree narcissism and no-exit terror, are compressed in a such a way as to make mortal peril seem like banality’s dark twin — as if too much self-indulgence and wild times invite a separate reality larger than life and much more lethal.

“Cloverfield” claustrophobically eliminates the space between fun and fear, introducing an abyss no one is prepared for. Watching the monster-introducing minutes unfold is as good an undistilled picture of chaos and dread as you’re likely to find on film. As for the rest, the monster wins.

Finally comes my top SCABET choice, likely to surprise some since it’s fairly plebeian. In 2005, Steven Spielberg released his version of H.G. Wells’s timeless “War of the Worlds,” an interplanetary war fable covered by just about every modern genre, comic books, radio, film, and video games. When Spielberg threw Tom Cruise into his version, critics sighed and braced themselves for a hefty dose of hackneyed Cruising. This guy has always liked the camera, and it’s always returned the favor. And there’s plenty of Tom face-time. As a whole, the film plays out loudly and predictably, with Spielberg’s usually mix of SFX fantasy and family values, righteousness and redemption, with a coda that’s happy-ending smug in too many ways to count.

But forget about that.

Focus instead on the film’s first 15 or so minutes, among the most terrifying ever set to film.

Given the early framework, Cruise is a plus. He’s a dad going home to be with his daughter (his wife is about to head to Boston) when the urban skies darken and begin behaving in a way that makes no normal storm sense. The SCABET kicks in hard and strong.

Cruise is at first amused — slightly unsettled, but not unduly. Bad weather, right? An eccentric thunderstorm, maybe. But Spielberg makes sure to add enough oddball twists (lightening without thunder) to make Cruise blink, then blink again. Braced for a “worst” he can’t imagine, the unimaginable rears up.

Cruise, here in the guise of divorced longshoreman Ray Ferrier, first tries making sense of things to his daughter. Then, when he can’t do so, he runs to his house in Bayonne, New Jersey. Hundreds have gathered to watch the snarling skies, but as they do the ground beneath them begins first to thump, and thump again, and then to split open in a gash as convincing as a raw wound.

Cruise’s Ferrier has almost no time to shift from bewilderment to alarm to terror (at times he wears a traumatized half-grin). The world as he knows it is coming apart from below and he’s stunned enough to want to stand still for a second, so he can make sense of it all, as though understanding something is enough to put a stop to it. For a few seconds, though, all grows hushed, only to begin again in what evolves into drumbeat destruction that will soon seize the film whole, and drown it.

But these minutes Spielberg spends on the emergence of Wells’s “tripod machines” are minutes any SCABET lover must take to heart and treasure. Cruise, for once, looks genuinely alarmed, unable to play the soothing dad. He’ll soon turn into both refugee and action hero, his narrative role that of protective father. Spielberg can’t help himself.

But before the mass human exodus, he’s able to trigger and sustain a focused portrayal of someone faced with a calamity — a calamity that is not a hurricane, earthquake, or slow-killing pandemic. This is modern-day siege imagined up close and personal. No one knows what to do. Everyone panics. The invaders take advantage of that chaos, and the depressive defeatism that follows.

Again, the whole of Spielberg’s effort doesn’t come close to matching his opening salvo. If you’ve never watched it, or watched it while chewing on reams of anti-Spielberg bubblegum (include me), then see it again, from a 2020 vantage point, the kind that whispers, “How can so much go so wrong so fast?”. Relax, suspend disbelief, and prepare to forget the meaning of relaxation.

That, after all, is what SCABET is all about.