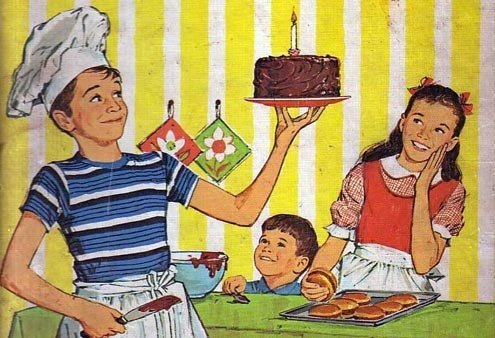 1957: The Betty Crocker Cookbook for Boys and Girls.
W

e’ve come a long way up the food chain, so to speak. Thanks to the web, we now know more about food than in any other time in history. Cooking schools are trendy. So are cooking sites and cookbooks, which are everywhere. Kitchen equipment is modern, eclectic and serves every imaginable purpose. Growing and eating organic foods isn’t a trend but a movement.

Why, then do so many people not cook?

New York Times columnist Mark Bittman, a cook and food critic in his own right, had some interesting thoughts on the subject. In a column that also served as a review of a new book by Michael Pollan he advocated a “gender-agnostic cooking culture.”

It was high time that everyone — men in particular — reclaimed their right to cooking. “Cooking,” he wrote, “is not only a democratic pleasure, it is also healthy, and it’s a link to the natural world.”

I like that Mr. Bittman feels that we all need to get back in the kitchen, not just mothers, but fathers, kids and the family pets (great for cleaning up spills…). He urged everyone to fire up their ovens and put on Betty Crocker aprons.

I wonder if anyone even remembers Betty Crocker, the mythical homemaker created up by General Mills a century ago to give their products a personal touch. Though a myth and a cliché, Betty came with values. She was advertised as the epitome of “the American homemaker: knowledgeable and caring.”

Maybe we don’t care any more.

Or maybe, according to Bittman, “marketers of prepared food have taken over our kitchens; the Food Channel fetishization of cooking has made it look intimidating, especially for those who grew up without parents in the kitchen…”

There’s no denying that much of the Western world is eating take out, relying on junk food, or falling back on what I consider an odious description for certain prepared foods: home-meal replacements.

That’s not to say pre-prepared and frozen food doesn’t have its value. It certainly does for working adults with kids who thanks to frozen fare are at least able to serve a meal (and maybe even sit down).

But what that means is that the people preparing your meals — your “cooks” — are basically a chemist, a shelf-life expert, a packaging director, an accountant and a spin-doctor. Oh, did I mention an accountant?

Pre-packaged food is one way but not the only way.

I know people with jobs and children (who also volunteer in the community, help their aging parents, and so on) who actually relax by getting in the kitchen and creating something simple and delicious for their families.

Note the use of “something.” Not four different meals for four members of the family. In fact, the one question a cook should avoid at all costs is “what do you want for dinner?” Making a meal individual can be the ruin of more general appreciation.

Instead, put one great meal on the table, with a little for everyone. If you do, chances are everyone will eat it, even if it takes a little getting used to. Divvy up the shopping and prep — kids, along with most partners, can be great cooks, given a little help from the head chef. (One of the sexiest dates my husband and I have — don’t laugh — is a visit to our local farmer’s market to choose beautiful food for our cherished lunches and dinners together.

I love Paola, the mother in Donna Leon’s wry books featuring the Venetian police commissioner and sleuth Guido Brunetti. “Italians,” says Leon, “have an attitude toward cooking. It’s an act of love and an act of creation.” And the component parts of that love carry over to her characters. While Paola always put something on the table for vegetarian daughter Chiara, and no one goes hungry, it’s unthinkable that she would stoop to cook for each finicky family member.

But back to Bittman: “When you cook, you choose the ingredients.” It’s a simple statement but easy to overlook.

And it’s also one thing the makers of your home-meal replacements — the Big Brothers of the food industry — will never get around to doing. “Though it may take time,” Bittman concludes, “cooking can be about patience and letting things happen. Good things, on many levels.” Hear, hear.