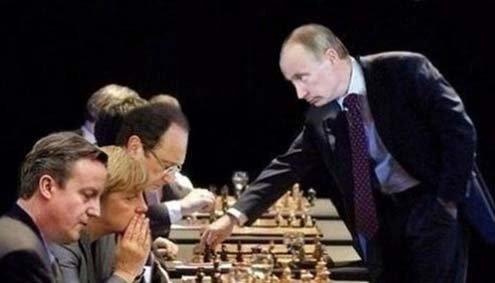 Sometimes the obvious move isn't the shrewdest one.
C

hess orthodoxy depends on thinking many moves ahead. It’s about visualizing grids and pathways available to block or pin back an opponent. It’s also about feigning strength to cover for weakness. Deception can catch lax opponents off guard induce blunders. In grandmaster-level chess, genius is as constant as extemporaneous moves are rare.

But it was just extemporaneousness that maverick American Bobby Fischer repeatedly sprung on Soviet champion Boris Spassky to capture the the world chess title in 1972, a victory hailed at the time as a Cold War coup. At one point even Spassky felt compelled to stand and applaud Fisher.

No one need applaud Vladimir Putin, but failing to recognize his grandmaster skills is as ever unwise.

Here was the United States expelling dozens of Russian diplomats to punish Moscow for allegedly hacking Democratic Party emails during the 2016 election campaign. Though the hacking very likely didn’t influence the final result, a Donald Trump victory, it was shamelessly heavy-handed, with a heavy dose of “who me?” Putin-esque flair.

In the diplomatic tit-for-tat that has long characterized the U.S.-Russian relationship, the exposing of spy-craft inevitably elicits ritual reprisal, usually in the form of diplomatic expulsions. The latest incident played to form, with U.S. executive branch denouncements (Barack Obama and John Kerry) followed by the announcement of a mass diplomatic expulsion.

The next move in this highly stylized match naturally belonged to Putin’s team, which predictably announced it too would kick out dozens of American diplomats.

That’s when Putin played to Fischer’s form. He let his foreign minister announce expulsions — headline-making misdirection — to then intervene personally to stay the execution. Lenient Russia, he said, would stand pat.

The reason of course is Donald Trump. Not only has Trump praised Putin, but he’s also gone out of his way to trivialize the hacking incident. And, surprise, Trump is the next president.

At another level, Putin, who depends on the loyalists in his keep, is sensitive to how much Trump is sensitive to gestures, and apparent deference. His move was tantamount to an insider pledge of allegiance to Trump’s foibles, foremost among them a deep appreciation for those who back away from showing him up. This shrewd semi-deference to Trump immediately put Putin a step ahead in the long, complex and highly personal Russo-American chess match only now beginning to take shape.

Most Russian presidents (and all Soviet ones) couldn’t have resisted playing the matching expulsion game, but Putin doesn’t slide into the “most” category (nor does Trump). He was trained in intelligence and knows when surrendering a piece is the deftest choice.

The U.S. predictably played by the expulsion book, an old one at that, while Putin looked down the row to the next player. Now, Trump will be left to applaud, since his business side appreciates bold strokes and, like Putin, he hates swearing by any rulebook he didn’t write (or can’t edit as he goes along).

The next act in U.S.-Russian relations will feature all manner of Putin-Trump theatrics. If the Russian president’s veering from protocol is any indication, it’s likely to contain reams of unscripted material.