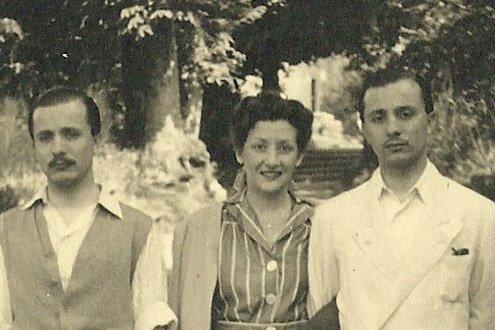 The twins insisted on sleeping in the same room — wife included.
F

orty years ago, my November visits to Rome meant spending considerable time with the Libohovas. The Albania of my mother’s side included Arslan, Kaplan, Shasha, Assaf, Beyré, whom I first met around a busy café table chock with empty cups and overflowing ashtrays. The group didn’t count the two countesses who lived like hermits in a nearby apartment. Both were born in the 19th-century. After the daily confabulations Beyré brought them sweets.

My mother married Arslan (or was it his identical twin brother Kaplan?) in the early 1940s. Since both were self-styled counts, she became a literal “little princess,” or count’s consort. Though she left the marriage after World War II, the Albanian family continued tugging at her fringes, which in turn saw me tugged to the café for the late afternoon holding forth that usually began at 5 p.m. and lasted until well past 7, or whenever Arslan and Kaplan tired of detailing Communist conspiracies to the rest of the group and said it was time for them to attend a dinner party — that in all likelihood didn’t exist, or so said my mother. In truth, she whispered, they were probably just going home to do what they usually did: dine together alone, an appropriate contradiction.

My mother married Kaplan (or was it Arslan?) during the worst of the war, when marrying an Albania exile seemed the only way that an illegal Polish refugee might survive in Fascist Rome. The marriage worked until Arslan (or was it Kaplan?) insisted he couldn’t sleep without his brother and the three ended up in a single bedroom, not a sexual arrangement but a familial one. Just after the war, my mother left one, and both, but the friendship endured.

My mother said Arslan and Kaplan had never worked a day in their lives, which I didn’t believe, until they confirmed it in proud unison: “We do not work. That is not for us.” Their voices were exactly alike. They subsisted on a joint pension based on having served briefly with Italian colonial forces in Albania. They pined for King Zog. It sounded to me, an American boy on maternal loan, like a tale from a second-rate Mars.

Assaf was Kaplan’s cousin, though Arslan somehow disputed this, forcing Assaf’s wife Shasha to shut them both up (members of the group often attacked each other in Albanian, spewing all kinds of exotic consonants). Shasha’s voice has the rasp of too many filterless cigarettes. She was, she said, a medium and claimed to speak to (and for) any number of ghosts — whom she no doubt alarmed. She also called Assaf “papa,” confusing me in the presence of Beyré, their daughter. Beyré was beautiful and married to a Carabinieri lieutenant her mother disparagingly referred to only as Don Giovanni, causing mother-daughter quarrels and inducing Kaplan (or was it Arslan?) to speak even more loudly about the latest Communist conspiracy. Surely I knew of it, he said to me plaintively. I was American after all. The Communists had killed John Kennedy and were busy contaminating global bread. How was it I didn’t know! I needed to take the information home with me. I promised I would.

Each afternoon, the Albanian “club” met at the same table under a display that contained fan-shaped sweets. The waiter knew them all by name and gave each a small silver spoon to stir with. Eccola! Shasha coughed whenever it was handed to her, sounding like she’d received a much-needed dagger.

Once, Beyré took me across the boulevard to meet the countesses. Each one patted me on the head like a tender pet. They were shriveled miniatures who together might have made up a human whole and who sat in a dimly lit living room and told stories about horse-drawn carriages, emirs and pashas and harems. Electricity seemed to bore them. A vase contained perfectly preserved dead roses. “Magic trick!” said one of them.

When I’d get back to Washington, and to school, I’d have to listen to my chipper friends Thanksgiving stories, in which they’d complain about their parents while reveling in tales of turkey and trimmings and fireplace ramblings. Some spoke of disliking cranberries, others of appreciating stuffing. I said nothing except that I’d had a good time. Or I borrowed from their tales, setting out an imagined image of a long table with not only turkey but also duck and stuffing and big red candles. I’d wow them with mysterious lies.

Anything, it seemed to me, was better than the truth: that I’d spent Thanksgiving in sixth dimension that included Albanian identical twins who knew the truth about Communist bread and involved a daily ritual that ended with bringing sweets to shrunken Ottoman countesses.

Arslan (or was it Kaplan?) died in 1978, the second twin soon after, and by the early 1980s only Beyré was left. By then she’d left Don Giovanni, wailing about his “crooked soul.” She’d seen this crookedness in a vision, since she’d apparently inherited her mother’s knack for the supernatural. The last time I saw her, after my mother’s death in 1988, she told me she was immune to all illness, until she died of a stroke at 60, well short — in every way — of the millennium.