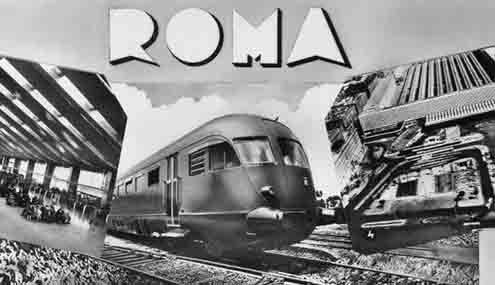 Rome's Termini station has always been a class-free and multiethnic hive, but now the tracks are locked off.
B

efore security, my two favorite cities possessed grand places to which I’d migrate after the madding crowd concluded its daylong work and sightseeing stampedes. In Washington, D.C. I’d decamp after dinner on the steps of the domed Jefferson Memorial, or even those of the Capital itself. Past midnight, parking spots were everywhere and many loitered in the fading heat undisturbed. From the Jefferson Memorial, Washington’s other memorials acted as compass points on a tree-lined horizon. At the Capital, the Washington Monument and the Lincoln Memorial aligned like toy soldiers in L’Enfant’s upright army. On sleepless night I’d make conversation with police patrols and oddball characters, lovers and lunatics, who cut erratic paths through the D.C. night.

Then there was Rome, which I’d visit in June and July, map in hand. I’d sit under the slabs that passed for columns at Termini, the capital’s Mussolini-era train station. Vagrants and worse came and went, ambassadors of a separate reality who spoke the raging language of anger, want and delusion. I’d jot down the outlines of would-be poems as disjointed as youth itself. I’d make my way to the Coliseum and the Forum, officially closed but forever open to creative interlopers. Night cats and young poets made equal claim to their quiet ancientness. Even St. Peter’s Square, not a barrier in sight, welcomed visitors in the holiest dead of night. I’d sometimes find myself alone amid the plinths at the center of Christendom.

Freedom was the right to roam a city unfettered. Only one barrier intervened, between East and West, bulked up in Berlin. The rest of the West was a poet’s paradise.

The other day I went to Termini to fetch a beautiful woman back from Bologna and met the newest wall: non-passengers can go only so far. Nuzzling up to trains is gone, a railway station become more like a segregated airport. The alcoves of my youth are now unavailable unless I’m going somewhere and can prove it.

The “siege” of Washington is old hat. Since 2001, memorials have been off limits to parking, their lots shut. Concrete walls abound. Lingering and loitering are discouraged even by day. At night, barriers and police cancel out the lolling and the dreaming that step-sitting once encouraged.

It’s all very rational of course, since real and imagined terrorists are a population the 21st-century mind fears in the manner of ghosts. Security is also faddish, reviving an old sense of moats and castle walls. To seal off is to make safe, and safe-makers aren’t poets. They block access to places of note lest baddies create mischief and more.

The dividing line between what can and cannot be seen and entered now hinges on valid travel documents or the end of the workday, depending on the venue. Would that blockage ensured safety, but it doesn’t, since the world is as ever like a dam: plug one leak and another appears.

Though the ways of discerning good from evil grow more invasive and sophisticated by the year, the dam’s leakage is endless. Walls can’t stop water’s connivance. What they stop instead is after-hours access to that which a civilization has built to inspire itself, a self-defeating irony.

Yet the walls just keep on coming, night wanderers turned away by perimeter protectors and daytime passersby choosing to see sights not through maps but apps, no train tracks or cracked steps necessary to make the digital more chaotically actual, and therefore poetic.