By a Slow River 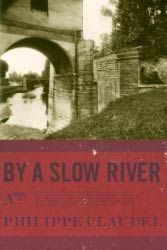 By Philippe Claudel, translated from the French by Hoyt Rogers

Claudel’s novel is slow-dissolving hard candy with a mystery core. An aging French policeman (Dadais, he’s called) recalls the World War I murder of a young girl that occurred by a river outside the village of “V” at the height of trench warfare. A young Breton deserter is charged but the uneasy cop suspects that the town’s remote chief magistrate, Destinat, played a role. “You can live in regrets as in a country,” says the cop, who like the magistrate is a widower.

Claudel’s conceit and delivery are miracles of understatement: he entwines Western Front horrors with the moral decay in “V” and ties both to an eerie murder mystery. “The opaqueness of this crime that has no culprit,” says Dadais, musing on the crime. He calls himself a man who has “interrogated the darkness.” This story is its own interrogation of darkness and of the past, which answers with brittle whispers.