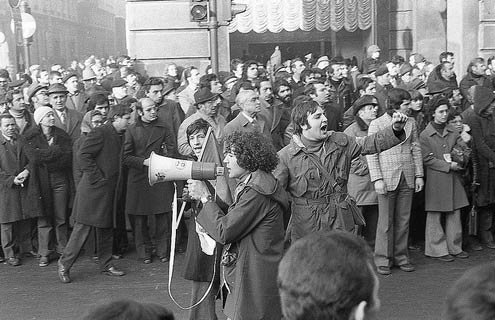 uropean economic modernism puts Italian Prime Minister Mario Monti on the practical side of history. If approved, his labor reforms will make it easier for employers to fire workers, a first step in changing an otherwise cast-iron landscape.

Dismissals went off the grid 1970, when labor legislation overcompensated for decades of workplace abuse and endemic paternalism by putting job stability a rung above the presumed caprices of bosses.

With health benefits and pensions covered, Italy’s new lower middle class began turning away from blue-collar work, which the country’s teeming immigrant population snapped up beginning in 1990. Domestic businesses, wise to the downside of the Italian temperament, tapped the immigrants and some reverted to older, colder ways. Shrewdness and cost cutting prevailed over the rule of law.

Now, Monti is attempting to dismantle the façade, to cheers from Berlin and other would-be pragmatists.

But there’s a cultural catch.

The worker-protection system erected by unions 40 years ago responded to an iniquitous labor culture that for the better part of Italian history was as unfair to its under-classes as China and Brazil is to its own now. Workers were peasant peons in state machinery that counted on their industry but refused to assign merit to their toil. They were socially ostracized and made to exist as an arm of an elite that equated industriousness with class obligation. Self-esteem, education, and national protection were the enemies of rulers fearful that workers, if respected, might get wrong idea about their worth, overturning the status quo. This feudal affinity persisted well into the postwar, particular in Italy’s sprawling, underused south.

The country’s nervous relationship with “job well done” merit began centuries ago, when the preeminent Roman Catholic Church propped up a smug noble class that responded by supplying it with artists, officers, bureaucrats and popes. All others worked at the behest of this upper layer or its criminal lower one. Misery and ignorance were fatalistically resigned to God’s will. Being good at something mattered only in terms of pleasing those who might confer favors. This, and war, defined the Italian peninsula for a millennia.

When Communist Party-propelled unions grew in clout in the 1960s, the task at hand was the literal reversal of history. This was accomplished Italian-style, with an intense, exaggerated inversion of nearly all that had come before. Putting workers on a level playing field also meant humbling bosses, forcing them to eat crow and do what they’ve never before imagined needing to, deferring to the work force.

A slew of progressive laws elevated fulltime workers to near-untouchable status. Overcompensating unions sought to create an impregnable system resistant to ancient class whims. A job would be a job forever, earned or not, and a guaranteed pension. Neither the ruling upper crust nor its union successors cared much for rewarding merit, which seemed like a turbulent proposition. Both feared the free market, seeing the physiology of labor solely in terms of us vs. them.

Italy’s best thinkers, makers and doers emerged almost exclusively from family run enterprises skillfully tutored by generations of parents who vetted those they allowed into their sacred trusts. Armani, Ferrari, Fiat and Gucci all began as mom and pop stores. Blood was the country’s guerrilla meritocracy.

Monti’s early stage remaking of the labor and unions systems, allegedly to make the country more competitive, presupposes Italians are at home with free market values and seek competition.

But they’re not, and they don’t.

Centuries of suspicion are not undone by one or two course corrections. Most Italians remain convinced that employers are disrespectful by nature and will revert to caprice if given the slightest chance. Leeway (outside personal ingenuity) is still perceived as sinister. Rewarding merit, while potentially noble, has no precedent.

Monti is a good technocrat and a trained European. He sees his job in terms of bringing Italy into line with countries that possess a more linear vision of work, one in which it progresses naturally from hiring to industry to accomplishment to reward, let the best man win, fairly if possible.

Yet much of Italy still doesn’t believe in fairness. There is the making of opportunity, hard work, cleverness, and shortcuts — all of it organically connected — with God excusing lapses. In the absence of a demonstrable conviction that merit and rigor in fact are central not only to work but the meaning of work, as well as to social progress, the labor system (like taxes) will continue to seem like a plot conjured by higher ups.

Monti may have his hands on the modern, but not on Italy.