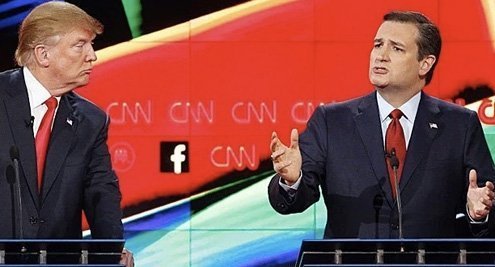 y year’s end, one of a cluster of Republican Party politicians will stand a chance of ascending to the American presidency. Why is, then, that most of these men and women still sound less like fully formed adults than churlishly immature preteens trying to outdo each other using mean-spirited, anti-thoughtful rhetoric that celebrates outrageousness as a virtue?

Yes, populist politicians have always made a point of pandering to rage and all manner verbal slaughter. They insult and excoriate. They impose self-righteousness. They work to mimic the language of “simple people” to seem distinct from the arcane, occasionally highbrow chitchat attached to Washington leadership.

But the tone this time is erratic if not desperate. This isn’t populist pandering. It stems from a measured conviction that rudeness and deliberate unsophisticated are more likely win durable fans. But warping the distinction separating those running for high office from those who disparage high office make the candidates into a club of mockers and ironists determined to one-up each other into high office.

Their swagger suggests not so much divided country — polarized is the favorite word — but one unwilling, and as a result unable, to reasonably discuss subjects such as foreign policy, immigration, and the disparity between rich and poor. All campaign speech appears to carry the burden of exaggeration and hyperbole because without it the distracted masses won’t pause to applaud or denounce. Presidential campaigning has never been pretty, granted, but this across-the-board regression to junior high school tactics makes the office of the presidency seem available to junior high school rules and its reckless hormones, which by all historical account it’s actually not — whether the president is a putative intellectual (Barack Obama) or a someone folksier (George W. Bush).

Bombardiers Donald Trump and Ted Cruz are nonetheless educated and fairly reasonable men of some accomplishment (though Trump has always adored testosterone flamboyance the way some women adore upscale shoes). Both men have said things that don’t so much belie common sense as suggest the only passage to winning support is through verbal violence. They seem to have concluded that the reasonable is unnecessary, or outdated, meaningless to an electorate that seeks mile-a-minute polemics to slake the need for agitation. This makes campaigning require undue amounts of narcissism. The line between immediate individual impact and national good is blurred, a line that politics has always put at risk, but never quite in this way.

Insults are so commonplace they throw a wrench into basic notions of adult interaction, and not just in politics. House of Horrors cackling mars civil exchanges even during debates. It’s an amusing but not at all funny spectacle that has yet to find its limits.

If so-called political correctness — affected obsequiousness to collective sensitivities — is objectionable (and it can be), its feral flip side makes for an equal and opposite vulgarity in the “I’m mad as hell and I’m not going to take it anymore” vein. Anger is quick to sicken repartee. Few think. Few reason. Instead, they respond and emote.

With the Republican Party in crisis, unsure whether to seek moderation (lately a losing choice) or celebrate insurgencies, its aspiring candidates remain stuck in a reckless cycle designed only to create distance from the intrinsic and mannered reasonableness of the Democratic incumbent.

Some of the hysteria will naturally recede as the field narrows and the contenders are whittled down. But including primal screams in presidential debate leaves scars.

From afar, the American political scene can seem more than ever like the stuff of vain as yet untrained children, happy to romp around impulsively in loud playground circles uninterested in the consequences what they might step on or run into. It’s the stuff of smiles — if, that is, you’re the parent of a seven-year-old. It’s somewhat less enticing when the loud kids doing the running aren’t kids but those who would be president.