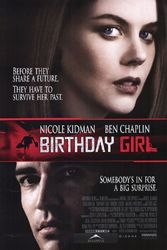 Director Jez Butterworth’s exercise lacks charm. It’s joyless. Which may be too much to ask from a noir Pygmalion. Ben Chaplain is John, a bored bank teller in the Midlands. He sends away to Russia for a mail order bride and gets lovely Sophia (Nicole Kidman in Meryl Streep accent mode). The sex is good, but absent a language Sophia and John bounce off walls. Cometh Alexei (Vincent Cassel) and Yuri (Matthieu Kassovitz), Sophia’s visiting Russian “friends.” Suddenly, Sophia isn’t Sophia but the opportunist Nadia and domestic bliss turns to criminal hoax, and worse. The tawdriness of what follows elicits a snappier connection between angry John and victimized Nadia, but by then the movie has lost steam. Butterworth is unable to mine much from Chaplain, which leaves Kidman mostly sighing and looking faux-Moscow sullen.