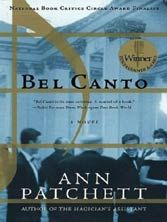 It’s an odd conceit, mixing opera worship with terrorism. Opera here is its own delicious tyranny, affecting and contagious.

Patchett swims in deft metaphor from the start: Gunmen seize the residence of a South American vice president and hold a major opera star (among others) hostage — the cast is UN in scope. What follows is pro-global under a dark star. Patchett’s messily occupied embassy harbors fear, yearning, coming-of-age, kisses, and arias.

It’s an unusual and beautifully written setup, though four and a half months and 300 pages can sag under the weight of even the most delicious contrivance.