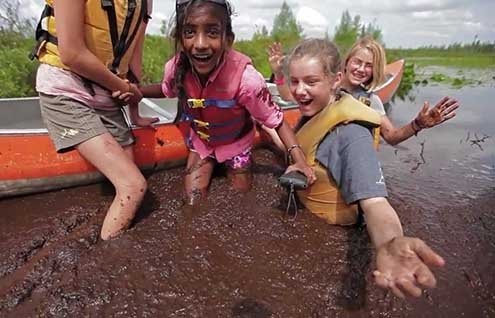 Camp Manito-wish: Mind if I go to art camp instead?
I

f all the members of your family have blonde hair and blue eyes and you have brown hair and brown eyes, questions pop up. As in, “Am I really related to these people?”

My own insecurity has always been a bit more eccentric. You know those family dinner gatherings when someone says, “Johnsons never do that kind of thing,” and everyone nods and laughs? Well, I’m the one who always realizes she’s done that very thing two weeks ago.

Holiday-time got me thinking about being a Johnson — my mother’s family — and suddenly I was overcome with doubt. For years I’d lulled myself into a sense of security because I looked like my relatives. But now, at 21, I was overcome by non-Johnson traits.

For years I was convinced that I couldn’t possibly belong to the Johnson clan because Johnsons didn’t like pineapple. It started when I was four in Santo Domingo. I got some pear juice that tasted off. My mother took a sip and told me it was pineapple juice. Satisfied that it wasn’t sour pear juice, I kept drinking it — until my mother exclaimed: “You like pineapple juice? People in our family usually don’t.”

After that, I stopped drinking or eating pineapples, terrified that a secret family council might find out and banish me. My resolve lasted until a few years ago when on a hot summer day I secretly tried it again. To my delight (and shame), I loved it. I even started eating it regularly. But guilt also ate me. I felt like a heretic. I was betraying my family. Finally I couldn’t hold it in any more. I blurted out a confession to my mother. “I LIKE PINEAPPLE!”

Well, as it turns out, disliking pineapple was a myth. My mother informed me Johnson’s did like pineapple so long as they were fresh, preferably if eaten in Hawaii, but absolutely not from a Del Monte can.

Another Johnson taboo was toes. In that none of us could touch them. We couldn’t reach them. When I first learned about the quirk I was proud. But my body soon betrayed me. Yoga was forced on me in school. Against my will I learned to touch my toes. Had I known yoga would lead me into betrayal I never would have gotten started.

As I grew more limber, my toe-touching skills got harder to conceal. Release from this torturous secret came one day when my mother announced that her backache had eased up. She could finally touch her toes. To which I replied (ecstatically): “We can touch our toes? I though Johnson’s were inflexible and proud!” Alas, another myth shattered. I could finally stretch at home guilt-free.

One Johnson rite I openly didn’t uphold was attending Camp Manito-wish in Wisconsin, as our dynasty dictated I should. My mother and her two siblings went and even became expedition leaders. My brother attended for years. So did my younger cousin.

Not me. I went to acting camp — in a city, not the wilderness. “Too bad you missed out on camp,” I was told. Guilt washed over me again. I had single-handedly interrupted the two-generation Camp Manito-wish tradition. Could the signs be any clearer that my Johnson blood was watered down? Wasn’t my black sheep status obvious?

Since some of my Johnson behavioral flaws can’t be ignored, I try focusing on the pluses. A distinguishing Johnson trait is that we bond through toil, most often by moving furniture. I may not have any Camp Manito-wish stories but I do have a few from our 30-day journey across Saskatchewan. I also enjoy mouse-proofing cabinets by sitting inside them and lining them with duct tape. I don’t complain when asked to take apart frames in a hot barn. I also have no qualms constantly rearranging furniture. Because, as Johnsons say, “It’s not a Johnson holiday unless we’ve moved furniture,” one requirement I have and will continue to fulfill proudly.