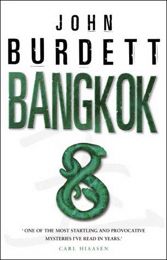 Pinch yourself after the first 20 pages. A black Marine named Bradley is found bitten to death in a E-class Mercedes by a swarm of drugged cobras after a wild car chase. But Bradley’s death causes the murder of Pichai, the partner of a Bangkok cop named Sonchai Jitpleecheep. Thus, Sonchai is spiritually indebted to Pichai to solve the Bradley case. Burdett’s book is ostensibly about Sonchai, his amoral boss Colonel Vikhorn, Sonchai’s mother (a “retired” whore), abundant sex for hire, and the helpfulness of spirits in unravelling mysteries. But Bangkok is the true diva.

Burdett knows his terrain and uses this thriller as a speed-fueled guidebook. His Bangkok is a giant liquid crystal screen awash in colors. Says Sonchai: “Even the guy who sells fried grasshoppers from a stall near the Buddha shrine owns a TV monitor on which he plays old Muhammad Ali fights and scenes from the siege of Stalingrad. Mostly, though, the screens show Manchester United playing Leeds to the boom of every kind of music from a thousand speakers.” Have fun.