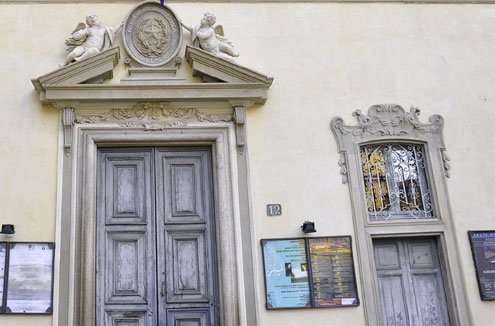 Scan the boards for clues.
W

hen I was a nine-year old girl in Riverside, Illinois, I cleaned my bedroom every Saturday morning. Now that I’m older and wiser I’ve learned to accumulate an appropriate mess. But I’m no messier than the Milan Conservatory and most state-run organizations in Italy. The confusion here is institutional.

Whenever my family members in the more linear U.S. ask me about school, classes, exams, tuition, I’m resigned to saying “I don’t know.”

They respond with havoc. They think I’m withholding information or behaving furtively. “Why won’t you tell me more about your life, Leila?” (or, from the more direct, “What the f- is going on?”)

To keep this in check I tell them an anecdote about getting into the conservatory last year.

It started with auditions. These were planned for May but were ultimately held the last week in October. A week before they started, I went into the secretary to inquire about where and when.

“They’ll probably be next Tuesday, maybe Wednesday,” she replied.

“How should I know where? Come next Tuesday or Wednesday morning and ask around.” What time?

The next Tuesday I arrived at 10 with a jar of tea to remedy the stress cold I’d developed over the weekend. I was directed first to the Sala Puccini, then told to check the Sala Verdi (these are separate theatres within the conservatory), and finally pointed to the choir room, where I found the candidates waiting out in the hall.

I started chatting with a Korean girl. Time passed, so I went to the bathroom. Coming back, I found a crowd standing around an organizer who had evidently received a list and was reading the names in alphabetical order. When a small Chinese girl pushed in her face into have a peek at the list, the monitor spat at her, “Maleducata!”

We began at Noon. Luckily, my name began with a C. My audition over, the monitor announced that the auditors were taking a two-hour lunch break. All others were told to come back at 3 p.m.

A week later, while glancing at school bulletin boards, I saw a long line spilling out into the courtyard. Apparently the audition results had been announced. When I got to the desk I pronounced my name.

The next day we were all told that the results had been confused. Maybe I hadn’t been accepted after all. “Check back again in another week!” Meanwhile, the school year had already started.

Yes, I got in. But in my second year at what is arguable Italy’s best music conservatory I still can’t definitively answer a simple questions, namely: Which classes should I be taking?

The best answer remains “ask around,” which I have, getting a variety of replies. One came from a Korean mezzo who suggested I take whatever classes I felt like – “but be careful, because last year my friend arrived at the exam for her diploma and realized that music history is required, and she’d never taken it.”

At times I look back wistfully on my impeccably organized days at Penn State. My best friend was the theater department secretary: there were four for about 150 students. The Milan Conservatory has two for 3,000 students, plus an extra secretary who comes and goes at will.

The American method is easy: people tell you what to do, and you do it. In Italy, much depends on personal initiative. But there are also positives.

At Penn State, I spent lots of time making to-do lists to manage all the exotic classes and extra-curriculars I’d involved myself in. In Milan, with no possible hope of organizing anything, I just stick with what’s most important to me, which is singing. The results are evident: I’m already studying Donizetti and Bellini, who write famously challenging opera roles.

This morning, I went by the secretary’s office to request a change in professors. I got halfway into the request before I was shooed away. It was lunchtime. Come back at 2 p.m.

Sometimes I wish my nine-year old self still had something to organize. Then again, I’m finally learning to sing.