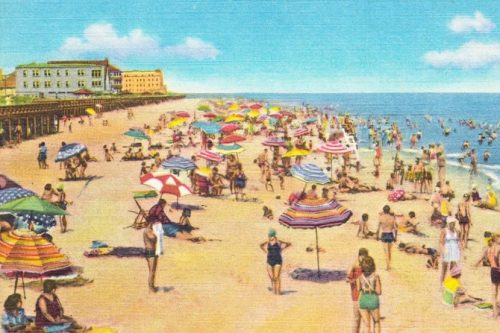 The boardwalk meant cotton candy on the sly, and finagling pizza.
T

affy in Funland, salt water endless to the east, the Atlantic past the boardwalk, this is how we once spent a freckled month of summer.

I was seven and I met a boy named Kenneth. He was from the Delaware town, or nearby, and spent the lazy weeks from June to September with his grandmother, a gentle woman who always greeted me with a kind hello and spent hours knitting behind a screened porch.

I’d run like a puppy to Kenneth’s house from our cottage a few blocks away (“be careful,” said my mother), after which the two of us migrated to the boardwalk and beach, two skinny migratory birds at the beginning of their life cycle.

Kenneth was big and broad for a seven-year-old. I was his weakling, he said. He collected one each summer and they painted the town. I didn’t understand the expression, still schooled in French, and awaited my brush.

The pinball players would mash themselves hip-first and whole into the zany blinking until the silver ball did their amped up bidding and the jellied legs of the overwrought machines came all but unmoored from the planks below.

Instead we’d stride up and down the planks, beside pizza places and boys ogling girls in brand new bikinis, all the rage, though I didn’t understand the fuss. My mother’s bathing suit was blue and covered her whole, her tapered slenderness forming what I considered perfect curves.

Aside from pizza there was cotton candy, forbidden by his grandmother but Kenneth didn’t care. We’d get this edible hair for a dime and get sticky together. We joked about gluing our mouths with it so they’d stay shut, the laughter sugared under. But we never did stop laughing.

We watched older boys hunched over pinball machines. Drawn as if hormonally to the bursts of pinging, they’d mash themselves hip-first and whole into the zany blinking until the silver ball did their amped up bidding and the jellied legs of the overwrought machines came all but unmoored from the planks below. “Free game!” they’d shriek, banshees in heat, until the white-frocked attendants, change jangling from their pouches, came round shouting, “Calm down boys! This is a family place!” But the free game frenzy persisted, a clockwork riot.

Kenneth told me pinballs were made from mercury, pure silver sculpted into balls in some very foreign place. I of course believed him.

We played Skee-Ball, a penny a game, my bowling forever wrong but Kenneth’s practiced, lucid; every three tosses into the hole marked 50 points. I admired his persistence and wanted some. “You can’t have it,” he told me. “Just watch and learn.” So I did.

We’d camp outside the lighthouse and scheme ways of slipping in under the cover of darkness, climbing the stairs to where the beacon was rotating, pushing its narrow light toward Philadelphia and New York, cities I’d visited but still couldn’t imagine in the abstract, suddenly awash in light like a movie theater front before an evening show.

Kenneth wanted to be a soldier, a Marine, and scale hills and mountains, troop to exotic places and unload a weapon he sculpted in the air, a gun outlined and aimed at gulls. Rat-tat-tat. He’d squint and his arms and fingers recoiled on cue. His father had a gun, he said. Mine did not, I told him. Why? He asked.

An obsession with the silver ball.

I didn’t know the answer. My father did words for a living, and the idea seemed to attract Kenneth, who’d draw letters and figures in the sand. “I am my own alphabet,” he told me. When I told him I didn’t understand he merely pushed me further down the boardwalk, back toward the cotton candy stalls, at times pausing to leap on the beach and look under the boardwalk where the smoochers smooched and he shouted, “This is a bust!” They’d be startled for a moment before the boy smoocher said, “Get lost, kids!”

But we never did get lost. We knew the towns every limb and loin, including the girl smoking under the waterpower where the cars passed, up to no good, said bystanders, though Kenneth liked her just fine. “Just fine” were two words he’s say lot. “Just fine,” he’d tell the pizza man after a slice he didn’t get but begged for with big blue eyes. Joe was the owner’s name. “Nothing’s free in life,” said Joe. “Just fine,” replied Kenneth, laughing. Then Joe gave him a free slice.

I can’t see much anymore but my mind’s eye remains hard at work, parked in the red Chevy past, at the movies, by the sea, with Kenneth, my French accent gradually giving way to American slang.

We stopped going to the beach in 1962. My father was sent to Madrid. Nearly a decade later I returned alone, my father dead and my mother on her own course. The house and the screened porch were still there, but not his grandmother. She too had gone, the new occupant told me. Did she ever know a boy named Kenneth? I asked. She stopped her sweeping at the mention of his name.

“Kenneth,” she said. “You didn’t know. Such a sweet boy. Joined the Marines. So handsome in his uniform. Saw him once or twice. Killed in a stupid parachute accident, a drill. Such a young man! Those blue eyes. Real shame.”

I thanked her, walked to the cotton candy stand, and took a bunch to the last bench at the very end, taking one pink bite and tossing the rest into the sea.