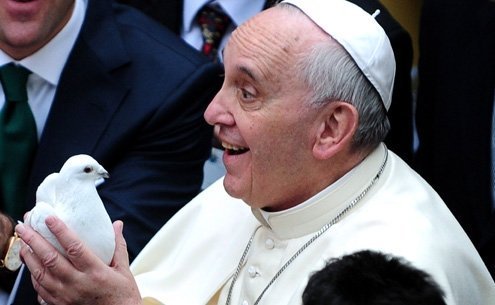 Pope Francis in Cuba, before traveling to the United States.
I

n a non-Catholic majority country, a pope is best seen through the prism of his approach to key Christian values, determined in part by his demeanor. This is especially true in the largely Protestant United States, an issue-oriented secular state with a highly educated and often contentious citizenry. Is the pope open-minded? Is he socially aware? Is he, to the extent possible, forward thinking and progressive? Is he available to the prospect of change?

Pope Francis, a modest Jesuit, is the perfect fit in the context of these very American questions. He is modest and self-effacing, unwilling to indulge papal aloofness. He is most at home with the poor, whom he considers victims of the rich (part and parcel of his South American past). He is less judgmental than most about sexual values and preferences, and as such unusually conscious of the 21st-century world. He is a missionary for tolerance. These attributes have produced a White House moniker, “the pope of hope,” and progressive mass media response varying from the respectful to the near reverent. He is the “humble pope” or the “people’s pope” and his mission is “to challenge the world” He is “immensely popular”; he smiles and enjoys crowds. He is a “showman” with style and compassion. He is the pope of “gardeners, janitors and the poor.” For some in the North American orbit, Pope Francis is the best thing that’s happened to the Vatican in decades, if not centuries.

That excited but shortsighted view is fostered mostly by those between ages 20 and 50 and is based on the brief but ostensibly haughty term of German pope Josef Ratzinger as well as the protracted and painful days of his slow-to-die predecessor, Karol Wojtyla, Pope John Paul II, now mostly remembered as gnarled figure with a quavering voice who spoke poor English, was unwaveringly conservative, and — thanks to chum Ratzinger — elevated to sainthood in supersonic time.

What’s interesting, however, is that while the self-styled “center of the world” U.S. busies itself insisting on Francis’ universal virtues, the truest, most actual universal — at least in Church terms — was in fact Wojtyla, who in his prime traveled constantly into the Catholic and less Catholic nooks of Asia, Africa and Latin America. Not at all progressive — and therefore of suspect worth in the U.S. — Wojtyla was the grassroots superstar, the true maker of global manias, a title the U.S. press now glibly confers of Francis, since he better suits the specifically American liberal dynamics of “hope.”

Wojtyla, a charismatic Pole, had little if any focused interest in the U.S., considering it a lost province of Catholicism. He worried about the numbing effects of consumer capitalism almost as much as he loathed communism, setting the tone for Francis, but resisted any pliancy on doctrinal issues, including the role of women, abortion and birth control. His perceived anti-liberalism was an insurmountable American obstruction.

The discounting of the U.S. — which he visited seven time, but never with deep affection — allowed him to focus on distant believers, which he did with uniquely galvanizing zeal. Over the decades he was greeted by hundreds of millions and conferred pre-web viral status in every part of the world minus the United States and Western Europe, which (aside from Poland) resisted him for his unbendingly traditional views. In all, Wojtyla, only 58 when elected, visited 129 countries in 104 pastoral visits, his first trips to Poland and Ireland particularly notable since three million turned out in Warsaw and about half number that in Dublin, a quarter of the Irish population. In 1985, over 11 scorching August days, he visited Togo, the Ivory Coast, Cameroon, Central African Republic, Zaire, Kenya and Morocco, countries with minority Catholic populations. He was not only of “the gardeners, the janitors and the poor,” but went to them, not humbly but with controlled authority.

These grueling “out-of-the-way” trips — undertaken despite severe injuries received in a 1981 assassination attempt — eventually tired even mass media. While the U.S. fretted over abortion and birth control (then as now), Wojtyla met Orthodox and Muslim leaders and apologized for the “maniacal crusaders” of the 13th-century. The impact such traveling would have now, in the linked age, is inestimable. But they are no longer occurring and few remember.

These recollections are not intended to detract from Francis or his virtues, but to suggest only that his global popularity, billed as unparalleled, is unparalleled only because this newest pope is refreshingly open to wider discussion of the topics more polemical Americans live to debate and disagree over, since disagreement increasingly defines American character. Francis is the “hopeful” pope because he openly acknowledges that Catholicism’s relevance in places such as the United States depends on making at least some concessions to secular positions, even those at odds with Church teachings. It’s easy for such a man to become a favorite, and to seem unique.

Wojtyla took a more damn-the-torpedoes approach. The world’s true Catholics, he insisted, lived in the world’s fringes. He would go to them. He would inspire them by his hands-on presence. He would kneel and kiss their land when he arrived. This brought continents to tears and re-established the Church’s reach. The least impressed nation was the one Francis has just impressed, if only its now-approving responses mattered substantively to the future of the faith, which they do not.