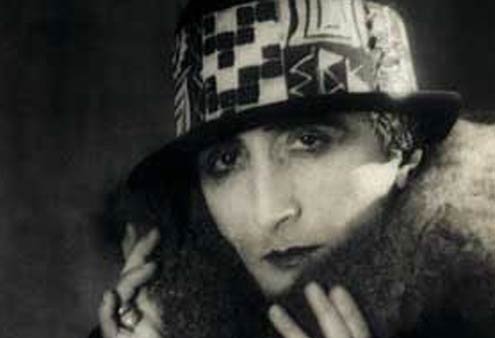 ho or what is Rrose? The answer has never been easy. Ninety years ago, Rrose Sélavy (as in c’est la vie) emerged as one of Marcel Duchamp’s many guises, affixed to a female character Duchamp both cross-dressed as and created art under throughout the decade.

In the last year or so, however, another Rrose has emerged readymade from the murk of electronic music’s mysterious Sandwell District collective. In a manner not unlike the rest of the group, there are no concrete biographical details: We’re pretty sure Rrose is a DJ based in the U.S. There seems to be a consensus among the press that it’s a he. We’re told that if the name is revealed, it would be recognizable to anyone familiar with the genre in the last decade. After witnessing a DJ set in the spring, I’d put them at around 5-foot-5 with a slouch. The rest is guesswork.

But with the release of (let’s say) his latest 12″ Preretinal, we can also say Rrose is one of the most potent producers not just in techno but across the whole of the electronic landscape. I realize this is no small declaration, but Preretinal — like the rest of his slim but significant discography – proves Rrose is no dilettante. This is an artist who has learned the history of techno by living it and absorbed the lessons of influences ranging from 1970s industrial to 1980s post-punk to 1990s Chicago house in stride. Some of that was revealed in a recent Resident Advisor podcast; the rest shines through in his surprisingly diverse catalog.

Preretinal’s two tracks are just the latest example and don’t necessarily reveal any sort of breakthrough so much as a a further evolution of the idea — this won’t easily be confused for his other singles but remains within the framework of the character. The pipe tap that propels “23 Lashes” (so named for the Michael Fay incident in Singapore) gives it an anxiety that wouldn’t otherwise be there; “Prism Guard” turns a simple melody into a deranged radar ping and then blends that into the beat itself. Both make for stunning listens.

I’m reminded of Basic Channel, early Vladislav Delay, and recent Modern Love releases at times, but the most relevant reference points wind up being his fellow Sandwell District cohorts. How does Rrose stand apart?

Put it this way: Regis talks a big game but still thrives on techno’s relentlessness; when he bothers, Female also sticks to a decaying Birmingham techno; Silent Servant tends to be more relaxed and melodic, smoother; and Function is buried among the extremes, a high BPM and occasional melody buoyed by long attacks and decays in the white noise.

Rrose interacts with all of these sounds in oblique ways — you’ll get the muscular workouts of a Regis set live and they’re alluded to in a track like “Waterfall,” but the singles and collaborative releases with noted political activist and sound artist Bob Ostertag betray a passion for the avant-garde. Complex, shifting rhythms suggest a willingness to ignore the dancefloor.

Melodies are also not a priority. A track like “Secretion” rolls along on the beat before adding a seasick bass swerve that sounds just as coldly mechanical as the rest of the track about a third of the way in. It’s hard to pinpoint exactly when the transition happens because he’s so good at integrating each new element into the mix, but the point is that everything is a feeling, a pulse. A melody is the negative space in between these sounds, the void at the heart of every song.

I’ve been talking about Rrose all year. With just 22 songs and 10 live performances to his name, it’s been an exercise in understanding my own excitement. Is it the music? Is it the experience of the live set? Is it the aesthetic? Is it the lack of personality, of information? The answer hasn’t been easy. Only one thing is certain: Duchamp would be proud.