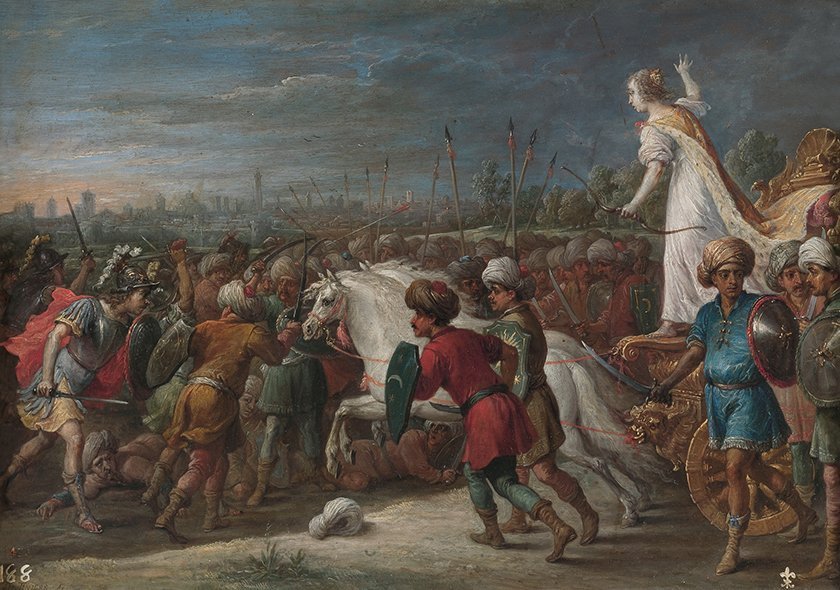 Had the Saracens and Moors not pinned the advancing West back on its haunches, would there have been a Europe? Painting by David Teniers.
I

n America, in Europe, in every land populated by the descendants of Europeans there is, among a large number of people, the notion that the Muslim is a stranger, an alien in the West, and since they have been so good as to let the poor fellow into their country he should really try harder to conform to their set of values.

He should really stop stinking up their neighborhood with the smell of garlic and of spices, he should get rid of that unsightly beard, he should apologize for 9/11 and 7/7 and the Charlie Hebdo murders, and if he is a true, upstanding human being (very few Muslims are) he will turn his back on this medieval, backward, violent religion out of which nothing good has ever come or he will try to reform it from the inside so that it resembles a progressive, left wing, “non-dogmatic” church. Only if he adopts the dogmas of the secular monoculture will he be a granted a kind of citizenhood, and even then he will not be a full citizen, for until he has proved himself down to the fourteenth generation his neighbors will look askance at him.

Why is the nation of Georgia not Asian? Why is Iran not European? Perhaps because Georgians are mostly Christians, and Iranians are largely not.

There is, in Sir Thomas Malory’s 1485 “Le Morte d’Arthur,” a Saracen knight of the Round Table, called Palamedes. Now, I don’t remember all the scenes very well, but I do remember a fight in which Sir Palamedes is spared (I think either by Tristan or Lancelot); out of mercy his opponent chooses not to kill him, because Palamedes the Saracen is an unbaptized heathen who will go straight to hell if he dies at this hour. If he had been a Christian, Tristan (or Lancelot) would have had no such qualms. This, in some ways, is so much more pleasant.

Not once in this narrative do we hear of the shape of his nose or the color of his skin or his questionable morals. Everybody has questionable morals in “Le Morte d’ Arthur”; Sir Palamedes is simply a human being and a knight, who just happens to be a heathen and a Saracen.

I mention this because our feelings on these matters are the result of a long historical development. We talk now about a globalized world. We are — we are a global village, we are tiny. Yet, though we be the nearest of neighbors, we are, I think, sometimes further apart in understanding than people once were. In the 3rd century AD, the neoplatonist philosopher Porphyry of Tyre wrote a biography of Plotinus, his teacher, the founder of the Neoplatonic school. In this account of the life of Plotinus we have a picture of a world that really was connected. Here is the belly of the earth, neither East nor West, neither North nor South, a melting pot; here Zethos the Arabian, a student of Plotinus, marries the daughter of a friend of Ammonius, an Egyptian philosopher from Alexandria.

Porphyry writes of Plotinus, “Plotinus the philosopher, our contemporary, seemed ashamed of his body. So deeply rooted was this feeling that he could never be induced to tell of his ancestry, his parentage, or his birthplace.” Here, more than 1,700 years ago, is a man who would have no picture no painted of himself, whose race and origins are unknown.

Plotinus could not have been a European. Aristotle and Thales, were they Europeans? Was Alexander the Great? Was there such a thing as Europe? If we explained to them that to be European is a great honor because Europeans are conquerors, builders of skyscrapers and of cars, detonators of bombs and detonators of destiny, would they comprehend our meaning?

Christians won what they were never promised, the kingdom of this world, and they seemed to expect to hold onto it.

Why is the nation of Georgia not Asian? Why is Iran not European? The only reason that comes to mind is that Georgians, by and large, are Christians, and Iranians, by and large, are not. Of course, this is a doubtful way of solving the problem. Ethiopia is one of the oldest Christian countries in the world, but that hardly makes it European. However, there is something to it: since the conversion of Constantine, Christians won what they were never promised, the kingdom of this world, and they seemed to expect to hold onto it. But then came the spread of Islam, and Christendom retreated westward. If it were not for that could Europe as we know it have come to be?

It is peculiar that the post-Christian descendants of Christians cling so tightly to this rather unchristian prejudice of their ancestors. As for the Christians who still exist, they should really get over it. After all, they have much more in common with their Muslim neighbors than they do with capitalists, communists, materialists, nominalists, atheists, progressivists, solipsists, and many other groups of ists.

The modern West is a bastard child of dead Christendom. Though it may not give two hoots about its parentage (except when a Muslim throws a bomb on Paris or somewhere and a politician comes up on the podium, crying that Christendom needs defending from the crescent), the fact remains that its genealogy is Christian. And Christianity to Islam is not as a Chinaman to an Ethiopian. Islam, despite its divergence from Christianity in dogma, is part of the same story. If you imagine a post-modern retelling of Jane Austen’s “Pride and Prejudice,” in which the odious Mr. Collins is, for some reason not revealed to us in the original, not odious at all, but a well-respected member of the Bennett family, you will begin to apprehend where Islam stands in relation to Christianity. In a way, Islam is almost a Judaic revision of Christianity (without thereby becoming Jewish). The Quran is critical of the Jews because they so rarely listened to Moses in the desert, and it is critical of Christians for diluting the pure Abrahamic monotheism. With a few differences here and there, the characters of the story are the same. So, in a way, Muslims have more in common with the Christian origin of the West than do many modern Westerners.

The Muslim, along with the Jew and the Christian and the pagan of the ancient Romano-Greek world, is a member of a conversation that has been going on for centuries. It is the only interesting conversation people can have. Everybody else may think the most important thing in the world is garbage pick-up day or voting day or the state of the potholes or socialism, but this merry band knows that the most interesting thing in the world is a thing outside of the world, a thing that is not a thing at all — it is a thing, a non-thing, a nothing outside of all possible worlds, underpinning every world; it is the absolute nature of the one existent, only existent, self-subsisting Only One. He whom they call God.

As for the Muslim being a stranger in the West, he never was. That middle earth of Plotinus, that garden of thought cultivated by that sage-errant Socrates, was watered by multiple streams, one of which was Islam.