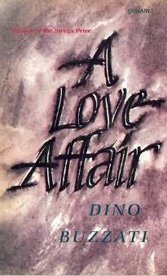 By By Dino Buzzati, translated from the Italian by Joseph Green

Dino Buzzatti’s gripping Dolce Vita-era story of a middle-age Milan man’s stricken infatuation with a 20-year-old prostitute (Un amore) combines a moral thriller’s pace with ferocious insight into male fantasy and self-indulgence. Unmarried, 49-year-old Antonio Dorigo is a prosperous but deeply insecure set designer who considers himself ugly and has long satisfied his sexual needs with call girls supplied by a local madam, never thinking much about the women. Taken with capricious 20-year-old Laide, a pert La Scala dancer (“tough, determined, presumptuous, shameless, proud, insolent…”), self-involved Antonio enters into her teasing thrall, eventually paying her a “kept girl” stipend to fend off his all-consuming inner jealousy, which becomes the substance of the narrative.

The novel’s seeming Pygmalion surface — a middle class man seeking to redeem a “dissolute” girl — is undone by the gullible character of Antonio himself: self-loathing, disparaging of his own hypocrisy, credulous — almost contemptibly so. These ingredients feed the fantastical interior monologue he builds around impossible-to-have Laide (“She sold you her body and you kept insisting you’d also bought her soul,” another hooker tells Antonio). Being humiliated is his white man’s burden. His is the “tense exultation” of “unhappy love” in which suspicion, anxiety and doubt all play essential roles that Buzzati recognizes — just as he recognizes the bourgeois condescension of middle class life, “the world that at bottom [Antonio] despised and to which he belonged…” What you think you don’t have is what you think you most love. Sex is not love, and childlike Antonio uses Laide to manufacture the romantic drama he lacks.

During the war, muses Antonio, “the waiting and the fearing were transformed into energy, into taut, unemotional energy.” Buzzati coaxes this taut energy from tormented Antonio and unsentimental “lone lost girl” Laide, the differences between them sharpened by class and gender. Morally, the story is on par with Graham Greene’s “The End of the Affair,” with Antonio — who was Buzzati himself, the novel as exorcism —a seminal (if overlooked) Italian male archetype: “He was a man of nearly fifty, serious, well thought-of, respected, almost a man of importance. He was a child, he was lonely, he was badly treated, he was humiliated.” Just as mortifying, the translation is out of print.