A comedy of manners 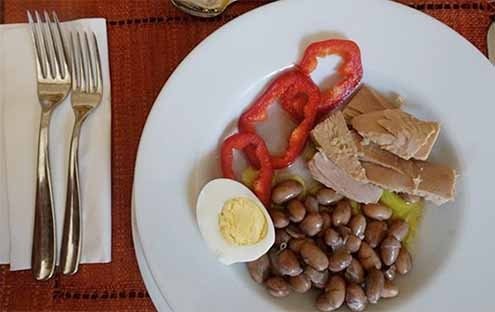 Matters of positioning can seem be all-important.
A

few years back, a very close friend returned from a long stay in Japan and was invited to dinner. When her bowl of pasta arrived, she proceeded to slurp and suck in the spaghetti with amazing agility and sound effects. We all stopped eating and watched, fascinated. I, for one, was tickled to death.

As a child, my brother and I would have slurping contests when our parents’ backs were turned. It was one of life’s great pleasures.

But, of course, not good manners — along with failing to put your napkin in your lap, waiting for everyone to be seated before plunging in to platters, and chewing with your mouth open (to name only a few).

But what are “correct” manners when they differ so dramatically the world over? We often assume that everyone follows the same rules, more or less. But when my future husband came to my stomping ground to meet my parents, he kindly offered to help set the table and began with napkins.

I’m not sure even now if it was a test for a new son-in-law (clearly a Hollywood screenwriter had no idea how to lay a table) or just a lapse in my mother’s otherwise fun and lively nature, but she gave him a look to wither a bocce ball, implying that no one in his right mind would put the napkins on the table like that. Whatever “that” was. Neither one of us remembers what was so wrong about his breach of etiquette, but we both remember the embarrassing moment.

In my book, you can put napkins under the tablemat. Who cares?

And yes, I happen to like putting the silverware in a use-from-the outside format: forks on the left starting with whatever you’re serving first, and knives on the right in the same way. Not to suggest there is plethora of silverware at our simple lunches and dinners, but yes, sometimes you don’t want to cut your cheese with a fish knife, right?

How about those nice burps after a good meal? As they do in the Middle East to show pleasure. At our house, purposeful burps were cause for ballistic recriminations, along with chatting and chewing at the same time, coughing or sneezing without covering your mouth or nose, and interrupting conversations without waiting until a sentence was finished. Clearly, we were not Italian.

Even with the chaos around our Roman table, there is something stimulating and, well, involved and lovable, about having everyone talking at once and listening to no one. Certainly it’s a far sight better than the silent, formal meals I’ve heard about from a friend who was not even allowed at table with his elders until he could make scintillating conversation about current affairs. He had to wear a blue blazer, too. Gone are the days. I think.

But when I went to lunch at a friend’s house in Rome and found my knife and fork on the right, resting calmly on the napkin, something in me was jolted from my complacent view that everyone knows where the silverware goes. And then I thought, wait a minute. In that particular household, there were kids just learning to use utensils, plus mostly pasta for lunches. So why on earth wouldn’t one pick up the nearest tool on the right instead of having to cross it over to the other hand?

And how about forks turned upside down next to the plate? Or forks rested on their tines on the edge of a bowl when their bottoms are on the mat? Or waiting for the cook to come to the table, even if it means that there is a possibility that all will be cold when she or he shows up?

On that subject, I love it that Italians, especially with family, plunge in right away to a lovely hot dish that would certainly suffer from waiting. As a cook, I’m thrilled when no one waits. But, of course, all too many do, politely suffering with growling tummies until I pick up my fork.

I also adore making the so-called “little shoe,” fare la scarpetta, using bread to soak in the remaining drops of goodness on my plate. Try that in France and the looks would make my mother’s pale.

For me,when all’s said and done manners are whatever works without drooling on your dinner partner. And little did my disapproving mother know that my husband’s mamma, a very proper Vermonter and surely a teacher of passable manners to her little darlings, had dined with the kings of Kuwait and Spain. I’ll bet those guys knew where to put the napkins.