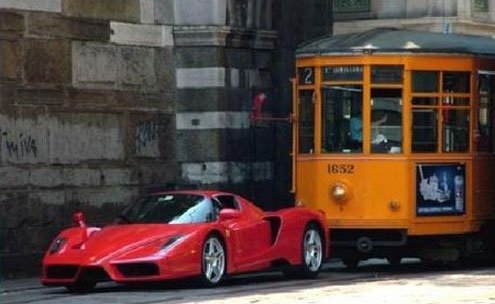 am sitting with iced lemon water and a notebook in a Milan bookstore-café after-hours on a Friday. I arrived late with the doomed plan of completing some outstanding work, but as usual began chatting, today with Lawrence, a Germany-based French music manager, and the lithe woman opposite him who, with her immaculate French accent, seemed more Parisian herself than the Piemontese she claimed.

I had awoken at 3 p.m. today to an abundant Spanish “brunch,” hence my lateness. For a girl of my age — a slim 21 years — this schedule might be colloquial. But I bulls-eyed my bodily rhythms at five, when my days started with sunrise Barbie play-dates. Consequently I felt quite sluggish, arising so out-of-my hours, and eating likewise at times gone astray. Lately, this instinct-mocking slowness has been the opposite of rare, which accounts for all my thrashing around.

Once upon a time in Florence a man named Hans told me: “Two things happen when a person lives on the streets. Either he becomes insane, or he becomes very wise.” Hans was fully employed as an art model, and homeless. He lived atop two suitcases in the Piazza Artigianali.

I told this to my visiting sister Mara at my home in Milan. Mara attends the University of Colorado and recently studied abroad in Brazil. I study opera at the Verdi Conservatory, having ditched Penn State University after freshman year. One morning over pancakes, conversation fell upon Mara’s childhood friend Sally Ann.

Sally Ann, Mara, and I come from a West Chicago suburb where children hold lemonade stands in summer and cry about snow getting in their mittens in winter-and where Sally Ann is now living at home, attending a local college and engaged to her high school sweetheart. A self-possessed young woman, conscious of her life choices, Sally Ann recently acknowledged her preference for her hometown comfort zone.

My own self-possession catapulted me to Italy semi-permanently and alone at age 19. It’s thrilling; it’s lovely; sometimes it’s just sometimes macabre grit. It’s the grit periods when I wonder what the hell I’m doing here in Milan, an Atlantic away from my comfort zone. In these moments, Sally Ann starts looking pretty smart.

A popular hypothesis suggests I’ve moved to Milan to gain “life experience” — that little thing that boosts the ego and has us doing things merely for the sake of things — but the generality bugs me. Mara herself attests to basking in the advertisement of the six months she spent living in Brazil, furtively withholding that the actual experience was painfully vulgar.

In parallel, my Italian opera studies might seem to masquerade as the glamorous “do art and waitress to make a living” gig that my high school friend Charlie, for example, daydreams about virtually on her blog. I have made no close friends in my two years since moving here, and in an attempt to pay rent, spend most nights in, studying or working. My first flat, in the ex-factory district on the city’s outskirts, was so small it was contracted as “storage space.”

I briefly entertained a waitress job at Café Trussardi alla Scala, but when the boss embezzled my tip share, I left in favor of an art gallery gig. That ended as soon as that boss advanced his extracurricular interests in me as a woman. I am currently passing out resumes. Of course, Kerouac-like, this too may all be glamorized.

In despair last February, I’d purchased a $500 one-way ticket to return to the States. Relative depression ensued — though upon horror at the realization of my purchase, I skipped the flight. I’m still in Milan. Rather than igniting ease, the mistaken ticket purchase restored the exigency of my quest. My opera training is advancing tremendously, if my teacher doesn’t say so herself — though my fundamentals are still problematic: housing, food, company, life and its spices.

I could solve the fundamentals by moving in with my dad in Chicago, tagging along to his tai chi classes and frequent theater outings. I could return to Penn State, in the middle of no where in Pennsylvania, watch reruns of “Sex in the City,” complain about “life” with friends and do all the other lovely things that college students do, then go to the dining hall for its all-I-can-eat buffet. Or, Sally Ann-like, I could hook my own high school sweetheart (never mind I didn’t date in high school), and we could all joint-honeymoon to Hawaii.

Tonight I went to dinner with my ex-boyfriend on the Naviglio, Milan’s meager version of Venice. Heading home, we ran into the exotic Lawrence and his lithe companion from the café. I introduced my dinner-mate, Antonio, who is Spanish. Suddenly Lawrence and the lithe one sprung into Antonio’s vernacular, making that four fluent languages the lithe one speaks, to Lawrence’s three, and me and my ex’s two.

I referred this linguistic story to my mother, who was gardening and preparing a barbecue at her home in Ohio; she recently moved back to her hometown with her own high school sweetheart. She found the anecdote terribly exotic.

Back home alone, I read a poem from Walt Whitman’s “Leaves of Grass.” It may be noted that Whitman wrote just one volume — this one — in his entire life. In it, he praised the land, politics, and people of his home country — a country whose soil he never left in his entire lifetime. My hat would go off to you, Walt, if only I wore a hat.